Huffington Post: Demonstrators protested outside the US Embassy in London after assailants fired rockets at a refugee camp for an Iranian exile group in Iraq, killing six people and wounding more than 50. 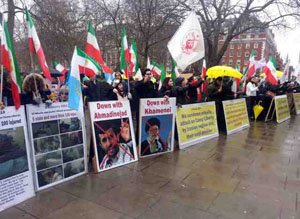 Demonstrators protested outside the US Embassy in London after assailants fired rockets at a refugee camp for an Iranian exile group in Iraq, killing six people and wounding more than 50.

The attack was at a former US military base near Baghdad, known as Camp Liberty, which houses opponents of the regime in Iran.

Amnesty International said the attack was “a despicable crime”, and authorities in Iraq must urgently investigate it and ensure all those wounded receive appropriate medical care.

The investigation should also look into the conduct of Iraqi security forces in the lead up and during the attack and whether they have failed to prevent it, a spokesman said.

“Authorities in Iraq must ensure not only that those responsible for this attack are brought to justice but that those living in the camp are protected.”

According to the People’s Mujahideen Organisation of Iran (PMOI), Iraqi authorities did not help those wounded and there were attempts to stop the PMOI taking injured people to the hospital.

Members of the Iranian community in Britain gathered outside the US Embassy, calling on the US government to facilitate the transfer of the 3,100 Iranian dissidents in the camp back to another camp in Iraq, Camp Ashraf, where they were before.

Lord Carlile of Berriew QC, on behalf of the British Parliamentary Committee for Iran Freedom, a 120-strong cross-party group of MPs and peers which supports the Iranian opposition, said: “We should demand that the United Kingdom government takes immediate action to bring this matter to the UN Security Council and takes steps to ensure that the residents of Camp Liberty are given humanitarian aid and returned to Camp Ashraf.

“It is time for weakness to cease in the diplomatic approach to Camp Liberty. The Iraqi ambassador should be summoned to the Foreign Office immediately.”

Camp Ashraf was home to Iranian dissidents in Iraq for 26 years and is said to be 80 times bigger than Camp Liberty.
Scotland Yard said that the protest at the embassy was peaceful.

The United Nations High Commissioner for Refugees, António Guterres, expressed his shock at what had happened.

“I strongly condemn this attack,” he said, noting that the residents of Camp Liberty are asylum seekers undergoing the refugee status determination process and thus entitled to international protection.

“This is a despicable act of violence.”

He added: “I call on the Iraqi government to do everything it can to guarantee security to the residents. The perpetrators must be found and brought to justice without delay.”

DPA: US Secretary of State Condoleezza Rice and German...