AP: The caretakers of the Olympics may have inadvertently accomplished what has eluded diplomats: Galvanizing Iran and the U.S. on a common goal. The Associated Press

By By NASSER KARIMI and BRIAN MURPHY,  – 1 hour ago 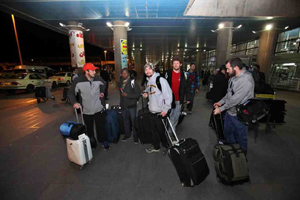 TEHRAN, Iran (AP) — The caretakers of the Olympics may have inadvertently accomplished what has eluded diplomats: Galvanizing Iran and the U.S. on a common goal.

Wrestling officials from the arch foes appeared to be in bonding mode Tuesday on the sidelines of a Tehran tournament less than a week after the stunning decision by the International Olympic Committee that will force the ancient sport — as old as the Olympics themselves — to lobby for a spot at the 2020 Games.

Already, the fight to keep wrestling in the Olympics has brought the U.S. and Cuban federations into a possible alliance. But close cooperation between Iran and America would be an even more remarkable display of common cause with almost everything else driving them apart — led by an impasse over Tehran’s nuclear program and Western sanctions that have upended the Iranian economy.

It’s unlikely that any kind of wrestling detente would spill over into the wider issues, but it’s certain to at least draw attention to the power of sports as a low-risk icebreaker going back to the historic 1971 “pingpong diplomacy” between China and the U.S.

U.S. freestyle coach Zeke Jones, speaking to The Associated Press by phone from Tehran, said that officials from 10 of the world’s top wrestling nations will meet Wednesday in Iran. Delegations from Azerbaijan, Belarus, Bulgaria, Georgia, Iran, Japan, Kazakhstan, the United States, Russia and Turkey will gather to discuss how to reverse the IOC’s decision.

Jones said that those countries were chosen because they finished in the top 10 in the freestyle competition at the 2011 world championships, the last time team scores were held at a major international meet.

“We’ll be standing arm-in-arm with Iran, and we’ll be standing with Russia as we will with lots of other countries,” said Mitch Hull, national teams director for USA Wrestling, in an interview in Tehran with AP Television News before the World Cup Tournament.

“Those (countries) really do make a difference because politically we’re not always on the same page, or politically with Russia, but in wrestling, there’s no doubt that we are all together in this effort and we consider Iran one of our strongest allies in the sport of wrestling,” Hull said.

Hull described them as “sport rivals, but they are friends in sport, too.”

“We have great confidence that we can work with the Iranian wrestling federation, Iranian wrestlers and the Iranian people to show the world that, no matter what’s happening politically, we have the same goal and the same belief and passion about the sport of wrestling,” he said.

Jones said that the World Cup, which ranks below only the world championships in annual importance, has come at a “perfect time,” given the IOC’s recent move.

Though Jones acknowledged that relations between international wrestling teams like the U.S. and Iran can be difficult, he said such competitions usually foster the kind of camaraderie and friendship the sport desperately needs.

“You’ll have absolutely zero problem with the countries being unified on saving wrestling,” Jones said. “The countries will do anything in working together to keep Olympic wrestling in the program.”

Hojatollah Khatib, the head of Iran’s wrestling federation, said the tournament would offer “the best opportunity to confront the decision” to drop the sport from the Olympics.

“We should resist the decision, determinedly,” Khatib was quoted by the semiofficial Mehr news agency as saying. “We should show our unity in the current event.”

On Monday, U.S. wrestling officials agreed to create a special committee charged with seeking to save Olympic wrestling, which will remain in the 2016 Summer Games in Rio de Janeiro. But it must compete against seven other events — including squash, roller sports and wakeboarding — for one open slot in the 2020 Games, which have yet to be awarded to a host city.

Iran also has said it is looking to join wrestling’s “big powers” to reverse the IOC decision. Last week, Iran’s wrestling federation and its Olympic committee said they would send a protest letter to the IOC.

The independent Etemad newspaper ran a report that described the “axis” of wrestling — Iran, the United States and Russia — as joining forces to keep the sport in the Olympics.

For Iran, it’s a mission of serious importance. Wrestling is considered by many to be something of a national sport — not as popular as soccer or with the deep Persian roots of polo, but one that gives Iran a chance to shine in international competitions. Wrestling also is Iran’s major medal sport at the Olympics.

Iran won three gold medals, its first in the Greco-Roman division, out of six overall in wrestling at the London Games, and the U.S. took two gold medals out of four overall.

“Do we destroy our historical sites which are symbols of humanity? No. Then, why should we destroy wrestling?” Iranian gold medalist Ali Reza Dabir said shortly after the IOC decision on Feb. 13.

In the current 14-team World Cup tournament in Tehran, the U.S. is joined by other freestyle wrestling powers including Russia and many of the former Soviet republics. Last week, Alexander Mamiashvili, the head of the Russian wrestling federation, said President Vladimir Putin had ordered a committee be formed to contest the IOC decision.

Despite the shared dismay over wrestling’s Olympic snub, Iran’s state media had only limited reports on the arrival of the American wrestlers — perhaps linked to the official anger over the sanctions that have hit Iran’s critical oil exports and blacklisted the country from international financial networks.

The cool reception is in distinct contrast to the almost celebrity welcome given in 1998 to the first U.S. wrestlers who competed in Iran since the 1979 Islamic Revolution that collapsed ties between the two countries. Washington cut relations after the U.S. Embassy was stormed, leading to 52 Americans being held hostage for 444 days.

There also have been some false starts.

In 2009, Iran invited the U.S. women’s badminton team to compete in a tournament, then denied visas by saying there was not enough time to process the applications. In late 2011, Iran bowed out of an invitational table tennis exhibition tournament in Qatar that included the U.S., North Korea and Pakistan.

The U.S. has sent more than 30 athletes to Iran under a sports exchange program launched in 2007, and more than 75 Iranian athletes and coaches have visited the United States.

Iran, IAEA to told new round of talks on Monday in Tehran