AFP: An Iranian-Pakistani consortium will start work next week on a much delayed $7.5 billion gas pipeline from Pakistan to Iran that has aroused strong US opposition, Pakistani officials said on Friday. 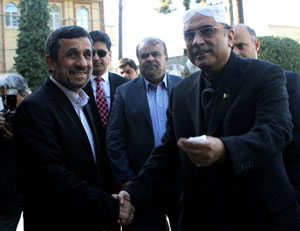 ISLAMABAD (AFP) — An Iranian-Pakistani consortium will start work next week on a much delayed $7.5 billion gas pipeline from Pakistan to Iran that has aroused strong US opposition, Pakistani officials said on Friday.

The date was announced after Pakistani President Asif Ali Zardari held talks in Tehran with Iranian counterpart Mahmoud Ahmadinejad and supreme leader Ayatollah Ali Khamenei, who urged Islamabad to press ahead with the project.

“The groundbreaking is going to be performed on March 11 on the Pakistani side of border and we hope that the presidents of the two countries will be present on the occasion,” a senior Pakistani official told AFP, requesting anonymity.

He said the ceremony would mark the start of work by an Iranian-Pakistani consortium on the 780-kilometre (485-mile) pipeline earmarked on the Pakistani side of the border, which is said to cost some $1.5 billion.

The pipeline on the Iranian side has almost been completed.

But Pakistan has run into repeated difficulties over the project, in finding the money and over US opposition and the threat of possible sanctions due to Iran’s controversial nuclear activities.

The United States says it is providing Pakistan with alternative means to help overcome its crushing energy crisis and to avoid sanctions.

“It’s in their best interests to avoid any sanctionable activity, and we think that we provide and are providing… a better way to meet their energy needs,” State Department deputy acting spokesman Patrick Ventrell said Wednesday.

Islamabad has said it will pursue the gas pipeline project regardless, calling it vital towards overcome debilitating blackouts and suffocated industry.