Scoop: Members of Parliament, women’s rights personalities and legal and religious professionals on Tuesday urged the Foreign Office to support a call on the United Nations to urgently relocate more than 3,000 Iranian dissidents from a prison camp – Camp Liberty – in Baghdad, following a deadly missile attack last month. 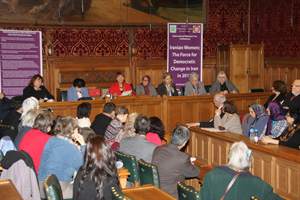 Members of Parliament, women’s rights personalities and legal and religious professionals on Tuesday urged the Foreign Office to support a call on the United Nations to urgently relocate more than 3,000 Iranian dissidents from a prison camp – Camp Liberty – in Baghdad, following a deadly missile attack last month.

In the run-up to International Women’s Day, the British Parliamentary Committee for Iran Freedom organised a conference entitled “Iranian Women – the Force for Democratic Change in Iran in 2013” in Committee Room 10 of the House of Commons.

In a video message from Paris, Mrs Maryam Rajavi, President-elect of the Iranian Resistance, said the issue of insecurity at Liberty was “urgent and immediate” and that residents were “totally defenceless in the face of further attacks”.

“This crime was carried out with the complicity of the Iraqi government. The UN Secretary General’s Special Representative in Iraq was either silent or facilitated this attack”, she said. “Protecting the residents of Liberty is the responsibility of the world community, especially the British Government, which welcomed and supported the transfer of the Ashrafis to Liberty. It must assume its share of responsibility”.

The speakers reiterated that it was necessary for the international community, in particular the UK and United States, to create a situation where the residents of Liberty are either transferred urgently to third countries or returned to their long-time home Camp Ashraf to be resettled from there.

Baroness Lister of Burtersett said: “The barbaric acts of the Iranian regime not only affect the good people of Iran but must be a concern to us all. … We owe it to ourselves and to the courageous residents of camps Ashraf and Liberty, who are carrying the flame of freedom for the good people of Iran, to show the world that change is possible and it is really worth fighting for. We must stand in solidarity with the brave women of Iran”.

A Shiite militia group allied to Iraqi Prime Minister Nuri Maliki and backed by Iran carried out a rocket attack on Camp Liberty on 9 February leaving seven residents, including a woman, killed and 100 injured. The group has publicly threatened to carry out further attacks.

Linda Lee, former President of the Law Society of England and Wales, said: “The Law Society is committed to seek protection for the residents of camps Ashraf and Liberty and will continue to join the call for doing so.”

Baroness Turner of Camden said: “It is the time that our government tells the government of Iraq that the atrocities must stop and the residents must be returned to Ashraf, because they are clearly not been looked after in Liberty”.

The speakers urged the UK government to adopt a “principled policy” on Iran and launch a dialogue with the democratic opposition National Council of Resistance of Iran, and support the Iranian women’s struggle for a free, secular and democratic Iran.

Camp Liberty residents are members of the main Iranian opposition group PMOI who are “protected persons” under the Fourth Geneva Convention. The UN and US have a legal obligation under international law to ensure the residents’ protection. Camp Ashraf was home to the PMOI members in Iraq for 26 years and is 80 times bigger than Camp Liberty.

British Parliamentarians and Women’s rights activists celebrate International Women’s Day by defending the rights of 1000 women, members of the Iranian Resistance in camps Ashraf and Liberty

Reuters: The international community is starting to lose patience...