Clock runs as Obama faces pressure for strike on Iran 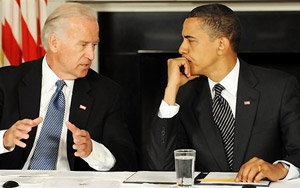 Still, the pressure on President Barack Obama’s administration to move toward military action is growing as Iran advances its uranium enrichment capabilities, and U.S. lawmakers, Israel and Persian Gulf allies press for results.

“The clock is ticking and the president has made that clear,” Kerry said in an interview in Doha with Andrea Mitchell of NBC News. “The president’s policy is that Iran will not get a nuclear weapon.”

Iran is using negotiations to “buy time” to pursue a nuclear weapons program, Israeli Prime Minister Benjamin Netanyahu said yesterday in a video address to the American Israel Public Affairs Committee’s annual conference in Washington. Although Iran’s uranium enrichment activities have yet to cross Israel’s “red line,” the Islamic Republic is “getting closer” to the point where it would be capable of quickly producing a nuclear weapon, he said.

U.S. Senator John McCain, an Arizona Republican, told the group, a major pro-Israel lobby, that diplomatic efforts with Iran “have failed, and it is very clear that they are on the path of having a nuclear weapon.”
Saudi Doubts

Separately, Saudi Foreign Minister Saud al-Faisal, following a meeting in Riyadh with Kerry, said yesterday that negotiations with Iran should have a time limit because the Iranians “have not proved to anybody that they are sincere” in their talks.

Biden, who addressed about 13,000 people at the Aipac conference shortly before Netanyahu spoke, said that Obama “is not bluffing” when he says he will prevent Iran from getting a nuclear weapon. “We are looking to and ready to negotiate peacefully, but all options, including military force, are on the table,” Biden said.

For now, it’s important to show that the U.S. and its partners have made a real attempt to settle the issue peacefully, he said.

“If, God forbid, the need to act occurs, it is critically important for the whole world to know we did everything in our power, we did everything that reasonably could have been expected, to avoid any confrontation,” Biden said. “And that matters because, God forbid, if we have to act, it’s important that the rest of the world is with us.”
Contingency Planning

The Pentagon is pursuing “serious contingency planning” – – along with the administration’s strategy of “tough-minded” and “crippling” sanctions — “with the objective of preventing Iran from acquiring a nuclear weapon,” Defense Secretary Chuck Hagel said in written answers to the Senate Armed Services Committee obtained yesterday by Bloomberg News.

Iran was the No. 6 producer in the Organization of Petroleum Exporting Countries in February, and any rise in tensions would hit oil markets. After declining in the past month, West Texas Intermediate crude for April delivery advanced 33 cents, or 0.4 percent, to $90.45 a barrel at 9:01 a.m. on the New York Mercantile Exchange.

The U.S. and its negotiating partners — France, the U.K., Russia, China and Germany — presented a new offer to Iran last week at talks in Kazakhstan. If Iran agrees to cease its output of 20 percent enriched uranium, the group would ease restrictions on Iran’s exports of petrochemical products and some additional items, Russia’s chief negotiator and Deputy Foreign Minister Sergei Ryabkov said in an interview.
Next Round

Negotiations are slated to continue on a technical level in Istanbul and then resume in Almaty on April 5, when world powers will be looking for a clear response from Iran. “The ball remains in the Iranian court,” European Union foreign affairs spokesman Michael Mann told reporters in Brussels yesterday.

In the meantime, Iran announced that it’s moving ahead with plans to install 3,000 new-generation centrifuges at its Natanz uranium-enrichment facility. Iran says its atomic program is for civilian energy and medical uses, and the UN’s International Atomic Energy Agency says it hasn’t detected any diversion of enriched uranium for possible military use.

The head of the IAEA, Yukiya Amano, publicly urged Iran yesterday to allow inspectors to visit the Parchin military site in response to intelligence that Iran had secretly operated a blast chamber there for testing nuclear-weapons components. Iran has cleaned up the site about 20 kilometers (12 miles) southeast of Tehran while preventing IAEA inspectors from visiting, saying it’s not covered by inspection requirements.
‘Red Line’

“Diplomacy has not worked,” Netanyahu said, speaking via satellite from Israel. Iran is “running out the clock. It has used negotiations, including the most recent ones, in order to buy time to press ahead with its nuclear program.”

Netanyahu said Iran hasn’t yet crossed the “red line” that he laid out in a speech at the United Nations last September, meaning the Islamic Republic hasn’t stockpiled enough medium-enriched uranium to fuel a nuclear weapon if further enriched.

“We have to stop its nuclear enrichment program before it’s too late,” the Israeli leader added.

Netanyahu’s remarks indicated that his timeline for possible military action is shorter than Obama’s. The prime minister “made clear that the gaps between his position on Iran and President Obama’s remain considerable,” Shimon Stein, a research fellow at Tel Aviv University’s Institute for National Security Studies, said in a telephone interview.
Senate Resolution

Last week, 15 U.S. senators co-sponsored a non-binding resolution by Republican Senator Lindsey Graham of South Carolina that cites concern about Iran’s nuclear activities and expresses support if “Israel is compelled to take military action in self-defense.” Today, some of the Aipac conference attendees will lobby their representatives on Capitol Hill.

In public remarks yesterday in Riyadh with Kerry, the Saudi foreign minister criticized Iran for continuing negotiations “to ask for more negotiation in the future.”

“They reach common understanding only on issues that require further negotiation,” said Prince Saud, whose Arab, Sunni Islamic country is the U.S.’s most important Gulf ally and a nation historically hostile to Persian Shiite Iran.

Kerry repeated the U.S. priority on negotiations to stop Iran from acquiring a nuclear weapon, while cautioning that “talks will not go on for the sake of talks.”