AFP: Iran on Tuesday spurned a request by the IAEA for access to a military base where Tehran allegedly conducted nuclear weapons research, saying the issue should be addressed in a wider agreement with the UN atomic agency. 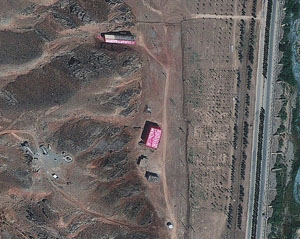 TEHRAN (AFP) — Iran on Tuesday spurned a request by the IAEA for access to a military base where Tehran allegedly conducted nuclear weapons research, saying the issue should be addressed in a wider agreement with the UN atomic agency.

“Our cooperation with the (International Atomic Energy Agency) will continue in its already established framework of cooperation,” foreign ministry spokesman Ramin Mehmanparast told a press conference when asked about Parchin military base near Tehran.

IAEA chief Yukiya Amano on Monday asked Iran to provide access to Parchin “without further delay, whether or not agreement has been reached on the structured approach”.

Mehmanparast said Tehran was seeking to reach “a comprehensive agreement … which clearly recognises our rights and also addresses their concerns.”

Talks between Iran and the agency “are moving in a positive direction,” but “the steps should be taken by two parties,” he added.

Iran has so far refused to give the IAEA access to places, documents and scientists involved in what the agency suspects were efforts, mostly in the past but possibly ongoing, to develop nuclear weapons.

Tehran says that the IAEA’s conclusions about the “possible military dimensions” of its programme are based on flawed information from Western and Israeli spy agencies, information that it says it has not been allowed to see.

It denies working or ever having worked on nuclear weapons and says that no nuclear activities have taken place at Parchin base and that therefore the IAEA has no right to conduct inspections there.

More than a year of meetings, the latest on February 13 in Tehran, have failed to agree on a so-called “structured approach” deal to address all the allegations, which were summarised in a major IAEA report in November 2011.

Amano said Monday that “negotiations must proceed with a sense of urgency” and that he “would like to report real progress by the next meeting of the next (IAEA) board meeting in June.”

He also countered Iranian suggestions that the last round of talks had seen some narrowing of positions, saying he was “not aware of any progress.”

Iran is under various rounds of sanctions designed by the United States, European Union and the UN Security Council to pressure it to curb its controversial nuclear programme.

AP: Hundreds of people rallied outside the White House...

AFP: The White House warned Iran on Wednesday over...