AFP: Arab interior ministers gathered for a security meeting in Riyadh on Wednesday accused Iran of supplying “logistic help to terrorist operations” in Bahrain and Yemen. 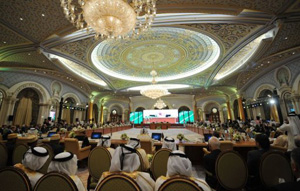 In a statement, the ministers “strongly denounced logistic aid supplied by Iran to terrorist operations in Bahrain and Yemen,” and congratulated security services in both countries for “dismantling cells and uncovering dangerous terror plots.”

In February, Sunni-ruled but Shiite-majority Bahrain accused the Islamic republic across the Gulf of training, arming and financing a “terrorist cell” which the authorities had busted, an accusation Tehran denied.

Sanaa in January said a ship transporting 40 tonnes of weapons from Iran and destined for Shiite rebels in the north of Yemen had been intercepted in the Gulf of Oman. Tehran also denied that charge.

Wednesday’s statement urged Arab states to “boost cooperation in pursuing terrorists” and to hand them over to the countries in which they were wanted men.

The ministers said it was necessary, “in order to eradicate terrorism, to dry up the finances” of organisations linked to the extremists.

Earlier, the ministers were advised to confront the spread of extremism through social media networks by using their own cyber knowhow.

Mohammed Kuman, head of the council of Arab interior ministers, told the meeting that “extremist thought… on social networks has resulted in a major increase in terrorist acts, political assassinations and sectarian conflicts.”

“As it has become impossible to control the content of social networks, it is important to produce counter-speech,” said Kuman.

“Ideas can only be fought by ideas,” the Saudi official said in an opening speech at the two-day Riyadh meeting.

Al-Qaeda and its regional offshoots often use jihadist Internet forums to post statements claiming responsibility for terror attacks, and to communicate with followers.

Its deadliest branch, the Yemen-based Al-Qaeda in the Arabian Peninsula (AQAP), began posting advertisements on the Internet last year offering training for suicide bombers to target the United States, Israel and France.

Kuman said such extremism could also be tackled through programmes to rehabilitate Al-Qaeda militants who have either turned themselves in or were arrested, like one set up by Saudi Interior Minister Prince Mohammed bin Nayef.

Some former detainees at the US military base in Guantanamo Bay who underwent the Saudi programme have been reintegrated into society, but many have also found their way back to extremism, including by joining AQAP.

Between 2003 and 2006, Saudi Arabia was targeted by a wave of attacks claimed by Al-Qaeda, prompting a crackdown by security forces in the ultra-conservative Gulf kingdom.

Since 2010, the Arab world has also been rocked by a wave of popular uprisings sparked by protests that were organised on websites like Facebook and Twitter.

They have resulted in the toppling of longtime autocratic leaders in Tunisia, Libya, Egypt and Yemen.

An uprising that erupted in Syria in March 2011 has degenerated into a civil war that has killed tens of thousands of people, and the embattled country was not represented at the ministerial meeting.

Iran in ‘talks’ with Petrobras on Caspian project, daily says

Bloomberg: Iran is in "talks" with Brazil's state-controlled oil...

Reuters: Iran signed an agreement with Afghanistan on Monday...