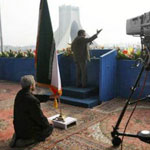 Reuters: Iran’s supreme leader may have helped Mahmoud Ahmadinejad to win two presidential elections, but he is now bent on stopping his turbulent protege from levering his own man into the job. By Marcus George

DUBAI (Reuters) – Iran’s supreme leader may have helped Mahmoud Ahmadinejad to win two presidential elections, but he is now bent on stopping his turbulent protege from levering his own man into the job.

Time was when even reformist presidents would defer to Ayatollah Ali Khamenei as the ultimate authority in the Islamic Republic’s clerical system. Ahmadinejad changed all that.

Ahmadinejad’s relentless quest for power and recognition has led him into direct confrontation with Khamenei, the man to whom he arguably owes his second term, if not his first.

And as Iran’s first non-clerical president since 1981, he has not stopped short of challenging the power of the clergy.

Even though he cannot stand for a third term, Ahmadinejad is widely seen as determined to extend his influence by backing his former chief of staff Esfandiar Rahim Mashaie for president.

“So magical is the political prowess attributed to Mashaie and Ahmadinejad’s populist appeal that Mashaie’s prospective candidacy causes much concern in the Khamenei camp,” said Shaul Bakhash, professor at George Mason University in the United States, weighing prospects for the election in mid-June.

Voters, preoccupied by bread-and-butter issues in an economy battered by Western sanctions imposed over Iran’s nuclear program, may only have conservatives to choose from.

Reformists are unlikely to get a look in. Mir-Hossein Mousavi and Mehdi Karoubi, who ran against Ahmadinejad in a 2009 election they denounced as rigged, languish under house arrest.

The reformist movement “has no organizational capacity and no recognized candidate right now,” said Scott Lucas of EA worldview, a news website that monitors Iranian media.

Iran’s rulers, keen to avert any repeat of the mass protests and violence that shook Iran after the 2009 poll, will try to ensure that only obedient candidates pass the vetting process.

And to block Mashaie or any other pro-Ahmadinejad candidate, Khamenei is turning to a three-man alliance of principalists – hardliners loyal to him – to unite behind one candidate to secure a quick and painless election win, say diplomats and analysts.

The driving force behind this appears to be the supreme leader’s foreign policy adviser Ali Akbar Velayati, who is one of the three possible contenders, along with Tehran mayor Mohammad Baqer Qalibaf and lawmaker Gholam Ali Haddad Adel.

“If principalists are divided … and the presidency is not in the hands of principalists in the future, we will have a tragedy,” Velayati said last month.

“From these three people one person will be introduced as a candidate, so we can finish the job in the first round.”

Analysts agree that Khamenei, deeply concerned about the election outcome, has given the nod to the initiative.

“Ayatollah Khamenei has systematically and effectively concentrated both power and authority in his person. No one in Iran today can become president without his approval,” said Ali Ansari, an Iran scholar at St Andrew’s University in Scotland.

Velayati appears to be leading a drive to eradicate Ahmadinejad’s power and unite all principality’s behind a single candidate – despite their own virulent political divisions.

A U.S.-trained doctor who served as foreign minister for 16 years until 1997, Velayati is now regarded as one of Khamenei’s most influential advisers, often deployed to carry out high-level initiatives on the leader’s orders.

Haddad Adel is the father-in-law of Khamenei’s third son, Mojtaba, the gate-keeper of access to the leader himself. An MP and former parliament speaker, he commands influence in the assembly and much respect for his academic credentials.

His family ties to Khamenei have strengthened his position within the leader’s inner circle, but have opened him to accusations that he is little more than a pawn of the leader.

The third member of the trio, Mohammad Baqer Qalibaf, is a former commander of Iran’s elite Revolutionary Guards (IRGC).

He is regarded as a pragmatist who “reaches out to more moderate conservatives”, said Scott Lucas of EA World view.

Popular, charismatic and boasting support from the Guards, Qalibaf’s inclusion in the alliance may be intended to stifle any threat he might pose by running as an independent candidate.

Washington Times: Something ominous is taking place in Iran....