AFP: A Kenyan court sentenced two Iranians to life in prison on Monday for terror-related charges, including possessing explosives allegedly to be used in bomb attacks. By Daniel Wesangula 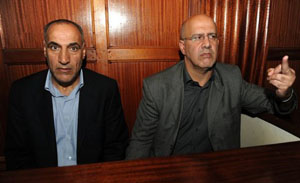 NAIROBI (AFP) — A Kenyan court sentenced two Iranians to life in prison on Monday for terror-related charges, including possessing explosives allegedly to be used in bomb attacks.

“I shudder to imagine the amount of damage that could have been seen,” judge Kiarie Waweru Kiarie told the court in the capital Nairobi.

Ahmed Mohammed, 50, and Sayed Mansour, 51, who were arrested last June, were found guilty of possessing 15 kilos (33 pounds) of the powerful explosive RDX, found by police hidden in a hole in a golf course.

The court said they had suspected links to a network planning bombings in Nairobi and the eastern port of Mombasa, the country’s second largest city.

“I have considered their individual pleas,” Kiarie said, but added: “The cry of victims of previous terrorist attacks is louder.”

They were sentenced to life on charge of committing an act intended to cause grievous harm, as well as 10 years for possession of explosives and 15 years for intention to commit serious crime, with the sentences to run concurrently.

Both defendants, dressed in suits and open neck shirts, showed little emotion as the sentence was read out, although when they were led out to the cells one angrily tried to kick a photographer.

Defence lawyer David Kirimi described the life terms as “outrageous” and said they would launch an appeal.

“The sentencing is wrong, misconceived and outrageous, and an injustice to our clients,” Kirimi told AFP.

Earlier, Kirimi had asked the court to grant the two Iranians a non-custodial sentence.

“The two are extremely remorseful of the circumstances they found themselves in,” Kirimi said, appealing for leniency due to alleged ill health, including heart problems and high blood pressure.

“We plead that the court hands them a sentence that will not amount to a death sentence.”

The wives of both the men, who were in court to watch the sentencing, issued a joint statement in which they alleged “unfair treatment” of their husbands.

They called for a retrial, saying there was “no concrete evidence linking our husbands to any evidence presented in court”.

The two men, who had denied the charges, were convicted last Thursday after a trial that began in July.

He added that “the question will be pursued through diplomatic channels.”

Iranian embassy official Mohamed Zaboli said outside the court: “There has been some extrajudicial pressure that influenced the ruling and the procedure,” without giving further details.

The men were arrested after police found the explosives in Mombasa, a key commercial hub as the main port for east Africa as well as a popular international tourist destination for its beachfront hotels on the palm-fringed Indian Ocean coast.

According to their lawyers, prior to their travel to Kenya the Iranians were retired civil servants who ran a tour company out of Iran together.

Defence lawyers alleged the suspects were interrogated by Israeli security officers while in Kenyan detention, claims dismissed by the prosecution.

The accusation followed a declaration by Israeli Prime Minister Benjamin Netanyahu, who shortly after the two were charged said Iran was plotting attacks against Israel in Kenya.

Israeli businesses in Kenya have been targeted in the past, including the Al-Qaeda-claimed bombing of an Israeli-owned hotel in Mombasa in 2002, in which 18 people died, as well as a failed missile strike on an Israeli charter plane at the same time.

Iran blasts UN but vows to work with IAEA