Wall Street Journal: Presidential debates are fairly new phenomena in Iranian politics. As such, Iranians and Iran-watchers follow them closely for a rare chance to hear an uncensored view of what politicians really think about various issues, ranging from the economy to social freedom and nuclear policy. 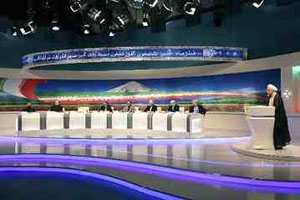 As such, Iranians and Iran-watchers follow them closely for a rare chance to hear an uncensored view of what politicians really think about various issues, ranging from the economy to social freedom and nuclear policy.

In 2009 the debate format closely resembled its U.S. counterpart, where two candidates would talk one-on-one, and take every opportunity to slam the other’s character and policy views.

This year the Iranian debates, which aired in three group sessions from May 31 to June 7, were much more measured. The eight candidates didn’t have much time to really debate one another, and instead were given fixed times to discuss their views. Only occasionally did they get the opportunity to ask questions, or give their opinion on another candidates comments.

The debate format also generated widespread public ridicule and endless jokes which circulated within Iran on text message and email. The debate sometimes looked as if it were a game show. Arguments erupted between the candidates and the moderator, who was insisting on asking multiple choice and yes-no questions from the candidates. During the debate devoted to economy, candidates were shown random pictures and asked to say the first thing that came into their heads.

One parliamentarian joked in parliament afterwards that for the debate focusing on culture, candidates should be given some crayons and paper and asked to draw whatever comes to mind.

Another joke circulating in Iran suggested the moderator play hide and seek with the candidates.Whoever finds him first would win the presidency.

But jokes aside, the debates did what they intended to do: offer some insight into the thinking of some of the regime’s most senior officials from nuclear negotiators to national security staff.

The last debate on Friday was about policy, both domestic and foreign. The nuclear negotiations and relations with the U.S. dominated part of the discussion.

Ali Akbar Velayati, the former foreign minister, told Mr.Jalili he was too “hard-headed” and had shown “little flexibility” during the negotiations.

Hassan Rohani, a former nuclear negotiator in the administration of President Mohamad Khatami, said that under his tenure Iran had managed to ward off the threat of war and sanctions, and had maintained its right to a peaceful nuclear program.

Shargh newspaper, a reformist publication, ran a headline on Saturday saying that the debates “revealed the secret arguments surrounding the nuclear negotiation.” Jame Jam newspaper, close to the government, said the arguments “made our enemies happy.”

The candidates’ comments prompted a reaction from Iran’s foreign minister Ali Akbar Salehi, who quickly dismissed the difference on opinion on how to handle the nuclear negotiations, as “personal views” of the candidates.

“These discussions are just a reflection of their personal understanding and are personal differences,” said Mr.Salehi adding that Iran would make no changes to its nuclear policy.

“There are fundamental differences in Iran and the U.S.’s foreign policy views. For example, the U.S. says it recognized the Zionist regime [Israel] while Iran does not. We believe in a pure Islamic model that is very modern while the U.S. insists on capitalism.”

“We have to calculate our national interests. It’s nice for the centrifuges to run but people’s livelihoods have to also run, our factories have to also run. Nuclear diplomacy has to be in the hands of people who have an understanding of the world and can resolve issues.”

“Diplomacy is not a philosophy class. What people see is that we haven’t taken a step forward in the nuclear talks. The art of a diplomat is not to waste what his predecessors have built. To sit here and talk amongst us is not called diplomacy. It is obvious Mr.Jalili doesn’t want the nuclear talks to move forward. Our diplomacy is obviously flawed.”

Hadad Adel, parliament member and relative of Mr.Khamenei by marragie:

“Why are we talking as if there is no problem [in our nuclear negotiations]? My question is can’t we resolve the nuclear issue with less consequences? There was a time when some men [meaning President Mahmoud Ahmadinejad] sanctions are torn up pieces of paper…the wrong reaction results in problems. When we say sanctions are meaningless we are harming the country.”

We have weaknesses in our foreign policy. Our foreign diplomacy is flawed that’s why it can’t enhance or spread our political views and managing this diplomacy is crucial.”

“Does the internal problems we have and the lack of balance in domestic talent, allow you to shape a foreign policy that helps resolve our issues? In our country we have big problems like unemployment, drug addiction and widespread bureaucracy.

“The country is facing problems in different areas and as a military commander recently said, the next president has to come and save the country from these problems. My question is who is responsible for these problems? We have to use diplomacy to improve our relations with the world.”

NYT Publishes an Article Biased Against the MEK

By Jubin Katiraie A New York Times article from earlier...