Reuters: A Lebanese protester was killed outside the Iranian embassy in Beirut on Sunday after gunmen from the Iranian-backed Shi’ite militia Hezbollah opened fire when anti-Hezbollah Shi’ite demonstrators approached, witnesses and officials said. 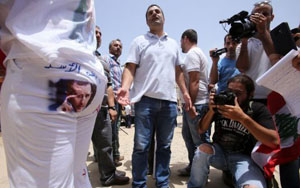 BEIRUT (Reuters) – A Lebanese protester was killed outside the Iranian embassy in Beirut on Sunday after gunmen from the Iranian-backed Shi’ite militia Hezbollah opened fire when anti-Hezbollah Shi’ite demonstrators approached, witnesses and officials said.

The Lebanese army deployed tanks and erected roadblocks across Beirut following the shooting, fearing a flare-up in sectarian and factional hostility. Protesters had condemned Iranian and Hezbollah backing for the Syrian president in a civil war that has been spreading across Lebanon’s border.

A Reuters journalist outside the Iranian embassy saw men with handguns and dressed in black with the yellow arm-bands of Hezbollah scuffle with a group who drew up in a bus. The gunmen drew their weapons and fired. Several protesters were hit.

Lebanese security officials said a member of a Shi’ite party that opposes Hezbollah was killed and several were injured. They said the protesters had not been armed.

They named the dead man as Hashem Salman of the Intima party, led by Ahmad al-Assad whose family has been politically eclipsed within the Shi’ite community since Iran and Syria backed Hezbollah during the Lebanese civil war in the 1980s.

When the bus carrying the Intima group stopped outside the embassy, Hezbollah supporters, identifiable by their yellow arm-bands and black clothing, wearing pistols on their belts, attacked the vehicle with batons, smashing its windows.

The two groups scuffled in the road and the Hezbollah men drew their weapons and opened fire. Several people appeared to be hit and fell, the Reuters journalist said. Lebanon’s official news agency put the number of wounded in the incident at three.

The clash between Shi’ites, one of the main religious groups in Lebanon, was relatively unusual. There has been recent fighting between Shi’ite supporters of Hezbollah and Lebanese Sunni Muslims who support the mainly Sunni rebels in Syria.

Tension between Sunnis and Shi’ites has risen in Lebanon and across the Middle East, notably in Iraq, since the Syrian civil war began in 2011. Last week, Hezbollah fighters played a key role in helping troops loyal to Syrian President Bashar al-Assad retake the strategic town of Qusair, near the Lebanese border, further inflaming Sunni anger at Hezbollah and Tehran.

Lebanese troops on Sunday strung barbed wire across roads around central Beirut and along the highway running south through suburbs that are a stronghold of Hezbollah support.

Demonstrators, including Sunnis and members of Lebanon’s large Christian community as well as Shi’ites opposed to Hezbollah, had marched in the direction of the Iranian mission.

Reuters: The next talks between six global powers and...