AFP: Iran suspects them of spying, but friends of eight Slovak paragliders detained in May know them as freedom-loving adrenalin junkies who travel the world to film high-flying documentaries. By Tatiana Bednarikova – 6 hours ago 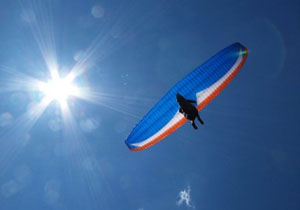 BRATISLAVA (AFP) — Iran suspects them of spying, but friends of eight Slovak paragliders detained in May know them as freedom-loving adrenalin junkies who travel the world to film high-flying documentaries.

“They have artistic backgrounds,” said fashion designer Michaela Bednarova, who works with one of the eight men detained in Iran.

“One of them is a photographer, one is an architect, another one is a visual artist,” she told AFP in Bratislava.

“They made a documentary during their trip to India and they went to Iran to collect material for their second film.”

Their first movie focussed on paragliding over the Himalayas in India and aired last year at the Mountains and the City film festival in the Slovak capital: http://www.horyamesto.sk/hlavny_program/filmy/pes_na_streche_sveta/.

Iran’s judiciary said earlier this week it was probing nine people — one Iranian and eight Slovaks — whom it arrested for “illegal activities, including photographing restricted areas” in the central Isfahan province.

Iran first announced the Slovaks’ arrests on May 22.

Located some 330 kilometres (200 miles) south of Tehran, Isfahan is home to many nuclear installations including the Natanz uranium enrichment facility.

The international community has imposed an arsenal of sanctions against Iran, accusing it of using its civilian nuclear energy programme as a cover for developing atomic weapons — charges Tehran flatly denies.

Another close friend of four of the men, an ex-roommate of one of them, describes them as 30-year-old nature lovers who travel on a shoe-string budget.

“Their only real expenses were flights, then they would always find humble accommodation with the locals,” he said on condition of anonymity due to the sensitive nature of the case.

“It must have been a huge misunderstanding — they are definitely no spies,” the Bratislava resident told AFP.

“They love different cultures, especially the Middle East. They aren’t your typical Western consumerist types,” he said, adding that the men had also paraglided in most of Central Europe, India and Morocco.

Their social media footprints paint a picture of environmentally conscious young men, some of whom are pictured sporting dreadlocks.

The public Facebook profile of Majo Krissak, one of the men named by the Slovak media, includes a May 8 post titled “Iran 2013” with a photograph of his paragliding equipment — a harness attached to a parachute-like glider that enables the user to free-fly through the air.

The picture is captioned: “Preparations for the Iran expedition. The first group has already landed in Tehran. The second group is ready to join them on Friday. Keep your fingers crossed so that we fly high and far away!”

Slovakia on Wednesday urged Iran to allow its diplomats access to the men arrested for allegedly photographing restricted areas including nuclear facilities.

The Slovak consul in Tehran has been allowed to visit them once since their arrest, according to Slovak Foreign Minister Miroslav Lajcak.

According to Slovak media, the paragliders ran into trouble for using two-band walkie talkies reportedly banned in Iran, as well as cameras designed for extreme sports.

On Monday, senior Iranian prosecutor Gholam Hossein Mohseni Ejeie claimed the detainees had smuggled in unspecified “equipment” that he said had been “divided into parts”, without elaborating.

But Robert Kaucarik, who heads Slovakia’s Amateur paragliding club, told AFP that compact extreme sports cameras “are so mainstream in Slovakia, people don’t even realise they can get in trouble for using them.”

He added that Iran is considered a desireable destination for paragliders due to its stable climate and interesting terrain.

The paraglidingearth.com website recommends 78 sites for the extreme sport in Iran, mostly along its mountainous northern and southern borders.