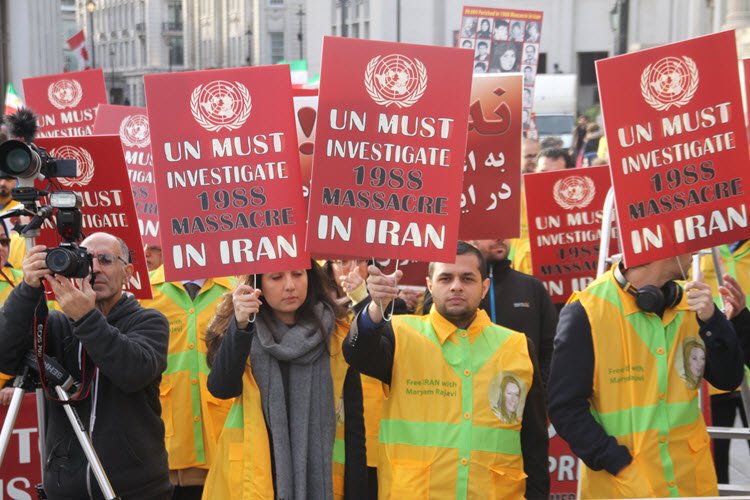 London, 27 Jun – What happened 29 years ago in Iran, and why after all these years, we are witnessing a crisis and a rising conflict among rival factions in the ruling class over that in Iran?

Throughout the summer of 1988 in Iran, some 30,000 political prisoners, the bulk of whom were MEK members or sympathizers, were executed. This year marks the 29th anniversary of that horrible Crime Against Humanity.

Last summer, an audio tape was revealed by the son of Hossein-Ali Montazeri. On August 9, 2016, the recording was heard for the first time, and thereon Khomeini’s former heir can be heard telling a gathering of members of the “Death Committee” that they’re winding up a crime against humanity, 28 years ago, on august 15, 1988. Wrote M. Hakamian in INU on June 24, 2017 and the following are excerpts of the article.

The tape sent shockwaves through Iran, as it adds new knowledge of the breadth and scope of the massacre and confirms that it involved the highest levels of leadership. For more than two decades silence has been imposed in regards to the massacre because, you see, Iranian leaders who held positions of power at that time, members of the notorious Death Commission, are still in leadership positions today.

They have never faced justice for committing this horrific crime against humanity.

Hossein-Ali Montazeri, who was consequently dismissed as the heir by Khomeini, and subsequently spent the rest of his life under house arrest, for the very remarks heard on the audio tape, tells members of the Death Commission, who include Hossein-Ali Nayyeri, the sharia judge, Morteza Eshraqi, the prosecutor, Ebrahim Raeesi, deputy prosecutor, and Mostafa Pourmohammadi, representative of the Ministry of Intelligence and Security (MOIS), “The greatest crime committed during the reign of the Islamic Republic, for which history will condemn us, has been committed by you. Your (names) will in the future be etched in the annals of history as criminals.” He adds, “Executing these people while there have been no new activities (by the prisoners) means that … the entire judicial system has been at fault.”

Following release of the audio tapes, the Iranian Resistance initiated a worldwide movement, and through the last ten months each within and outside Iran, have created a large momentum against the continued violation of human rights in Iran.

Regarding the recent revelations, Maryam Rajavi, President-elect of the Iranian Resistance, described the audio recording as an historical document. Mrs. Rajavi said that the recording attests to the strength of the Mojahedin (PMOI/MEK) political prisoners’ rejection of surrender, to their admirable allegiance and the perseverance of their commitment to the Iranian people. She called the recording “irrefutable evidence that leaders of the mullahs are responsible for crimes against humanity and the unprecedented genocide.”

In February 2017, Justice for the Victims of the 1988 Massacre in Iran (JVMI), revealed the main points of diverse mass graves in Iran. Page 349 of the JVMI report, “Inquiry into the 1988 mass executions in Iran”, refers to the mass grave close to the Behesht Abad burial site in Ahvaz. Then, Amnesty International revealed a point on June one, 2017 on its web site, warning that the Iranian authorities is also trying to desecrate a mass grave web site in Ahvaz, southern Asian nation in a shot to destroy important rhetorical proof, and sabotage opportunities for justice for the mass killings of political prisoners that happened across the country in 1988.

While Iranian officials attempt to counter the results of those revelations, growing sympathy for MEK members WHO were the main victims of this atrocious massacre, and increased popularity of the opposition movement have resulted, instead.

In recent months, following a report revealed by The Iranian Ministry of Intelligence, regarding the power and progress of the People’s Mojahedin Organization of Iran (PMOI or MEK), officials have admitted the Iranian youth has tended toward the attraction of the Mojahedin (MEK), additionally because the status of the Mojahedin at home and at the international level.

The director general of a state funded Habilian Foundation, Hashemi Nejad, stated, “We have control over 300 exhibitions against MEK| in Iran up to now. These days, MEK is getting recognized as a number one institute in defending Human Rights,” He intercalary that the duty currently, is to debate Human Rights problems against MEK since Iranian youths area unit the target of MEK. In step with Intelligence Ministry officers, an in depth analysis report against MEK, of quite 8 to 1000 words, has recently been revealed in the Habilian web site, affiliated to the Ministry.

“The Mojahedin Organization (MEK) is after… total change and removal of the Velayat-e faqih system in Iran…,” states the report.

It additionally discusses the role of MEK in exposing the Iranian’s administration secret comes to get nuclear weapons, saying, “Following exposure of the problem (nuclear weapons program), the media revealed reports during this regard and this was the start of a significant crisis that resulted within the adoption of many resolutions and sanctions with the devastating effects that area unit still continued.”

The Intelligence Ministry reminded the general public of the role of Mojahedin in the 2009 revolt, and admitted its worry of uprisings and revolts being tied to the nationwide resistance and to the Mojahedin, and wrote, “Mojahedin (MEK)… were still searching for a chance to strike the Islamic Republic of Iran, till the beginning of 2009 elections followed by the road riots, the cluster appropriated the chance and issued statements and messages to preparethe bottom for achieving their goals… one among the goals (of the MEK) in 2009 election was to get rid of Velayat-e faqih and change the regime.”

The Mojahedin’s advancement in the international arena was additionally noted, “…In addition, members of the (MEK) organization hold conferences in France from time to time… in the recent years, the Mojahedin organization has control campaign and conferences in each international events and communities, together with the United Nations, against the country and also the system.”

The report complete by describing the strategies to confront the MEK, such as, “Introducing and totally distinctive the (MEK) organization (i.e. which means distorting the image of the organization)… to stop, during this means, individuals and new members from connection the organization which might result in exaggerated injury to the system,” and intercalary, “Strengthening the borders and increasing the country’s defense power: By this action, we will} stop entry of the MEK members into the country… and then we are going to be able to avert and keep off the enemies of the system outside the borders.”

These confessions seem to indicate the facility, with reference to social additionally as standard standing, of the foreign terrorist organization and NCRI area unit welcome by the Iranian youth.

After the Mullahs were unable the failure to destroy the MEK by blockade and missile attacks, and also the Mojahedin were able to maintain the integrity of their organization and transfer themselves to a secure place, the regime is frightened, and that they try to frighten the Iranian individuals with warnings regarding the danger of Mojahedin.

In another report, revealed in Habilian web site, the Intelligence Ministry expressed that intellectual (thought) danger of unarmed MEK is far quite the threat of armed MEK.

In an interview with Vatan Emrouz, september four, 2016, the Secretary General of the Habilian establishment, that could be a branch of the Intelligence Ministry, mohammad Javad Hashemi Nejad, had previously warned regarding the danger of the MEK revelations, stating, “Mojahedin within the areas of human rights and connectedproblems are present within the European Parliament and within the U.S. and any places wherever there’s opposition to the system …MEK could be a dangerous force…”

This sense of danger is also attributed to the actual fact that the surge in power of the MEK has coincided with the divisiveness inside the Velayat-e faqih system, additionally because the unrest, within the type of immensely increasing protests and demonstrations, in Iranian society.

The assistance to the West by the foreign terrorist organization had power-assisted the West in revealing Iran’s secret nuclear missiles programme was additionally highlighted. to prevent the youth from connection the foreign terrorist organization, the Regime makes an attempt to gift a twisted read of the Resistance Forces, that is that the reason behind the exhibitions and flicks like “Magaraye Nimroz”, a movie by state run media, on screen currently.

However, within the thick of the info and exaggeration close it, a political analyst attacked the film. Sadegh Zibakalam, a social science faculty member at Teheran State University, associate degreed an associate of former President Ali Akbar Hashemi Rafsanjani, WHO was additionally answerable for dispatching of university students to war with Iraq throughout 80’s, criticized the film. He said, “The events during this picture show don’t seem to be reciting the truth of what is going on between the Revolutionary Guards (IRGC) and MEK therein era, we tend toarea unit condemnatory MEK, however haven’t asked why MEK fought back? As if they did it for no reason! This film is attempting to imply that IRGC agents were kind and caring for humanity, (this isn’t true) we tend to killed thousands of MEK members with none trials, similar to the killers of imaum Hossain (a seventh century revolutionary Muslim leader WHO created the last word sacrifice for social justice within the face of corruption and tyranny).” Zibakalam’s confession clearly shows the impotency of such desperate moves to alter the MEK.

In their recap of the report, The National Council of Resistance of Asian nation (NCRI) wrote, “The truth is that once the Mullahs were unable to destroy the MEK by cold-blooded blockade and missile attacks, and Mojahedin were able to maintain the integrity of their organization and transfer themselves to a secure place, the Mullahs area unit frightened currently. that’s why the mullahs often yowl and whimper regarding the danger of MEK.”

“This worry and sense of danger is especially attributable to the actual fact that the power and cohesion of the People’s Mojahedin Organization of Iran has coincided on the one hand with the weakness and supreme decay of the Velayat-e faqih system and also the crises engulfing the upper class, and on the opposite hand by the actual fact that Iran’s society is on the verge of explosion and prepared for insurrection and revolution and is just looking ahead to a spark,” they wrote.

Clinton not optimistic about Iran-U.S. thaw

New York Times: Expressing doubts about one of the Obama...