Though inside sources, the National Council of Resistance of Iran reveals Iran’s operations to assist Syrian dictator Bashar Assad. 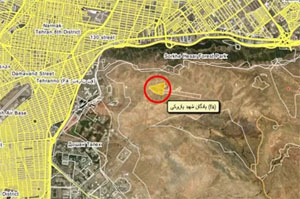 The National Council of Resistance of Iran (NCRI), an Iranian opposition group that has previously exposed top-secret Iranian nuclear sites, has provided the Clarion Project with precise details of Iran’s operations to assist Syrian dictator Bashar Assad. The information includes a photo of an alleged base in Iran where training is taking place.

MEK (the Mujahideen-e-Khalq resistance group, which is part of the NCRI ) says that the following data was gathered from dozens of sources inside the Iranian regime and accumulated by the MEK. This includes informants inside the Revolutionary Guards, Defense Ministry and the Joint Chiefs of Staff of the Armed Forces.

The training of operatives to fight in Syria is taking place northeast of Tehran at a Revolutionary Guards base called Saheb al-Zaman, also known as the 27th Shaheed Pazouki Base. The base is located in the southeast part of Sorkheh Hesar Park.

The NCRI tells the Clarion Project that the majority of trainees at the above base are Iraqis, specifically those belonging to Asa’ib Ahl al-Haq and Kataeb-Hezbollah. Approximately 90% of Asa’ib’s fighters have been sent to Syria since March. Iran is also recruiting fighters from Yemen, where it has a relationship with the Houthi rebels.

The intelligence details how the operation is run. The Iraqi Shiite terrorists are dispatched by a man named “Yousef” who oversees the group’s training. He speaks to each fighter sent to Syria and gives them $1,300 each to help take care of their families. The recruits are sent to an Asai’b Ahl-Haq base in Basra and then to the Shalamceh border region. The next destination is Ahvaz in Khuzestan Province.

Once in Iran, the terrorists are separated into groups of between 60 and 80 operatives and sent to Qom for pilgrimage. Abu Fatema, a former commander of the Iraqi “Special Groups” that fought U.S. forces runs a base in Qom that is visited by the recruits. The Iraqis then visit the grave of Ayatollah Khomeini and then training begins. The recruits are provided with military attire and arms.

The main groups of Iraqis are trained for two weeks in Tehran and the remainder are trained in Khuzestan Province. The training in Tehran takes place at the aforementioned base. The officer in charge of the base goes by the name of Abu Younes. The training includes assault rifles, machine guns, sniper rifles, mortar launchers, bazookas, Improvised Explosive Devices (IEDs), grenades and other weapons.

The group is divided into four sub-groups, each receiving more specialized training in mortar use, sniping, IED use or intelligence-gathering. The tactical training course includes urban warfare and night assault simulations.  Every individual learns how to use mortars and rockets.

Once training is finished, the Iraqis are given forged documentation and secretly flown to Syria. Even after landing at the airport after midnight, the recruits are told to avoid turning on cell phones or any lights, including lighting inside the plane and in the landing area, in order to keep them undetected.

An official from Asai’b meets the recruits at the airport and they go to a place called “Haran al-Awamid.” They serve in Syria for 8 to 10 weeks at a time. The last dispatch was sent in the second half of June 2013, and that group will return to Iraq in mid-September.

The NCRI also provided details about the organization of the Iran-backed Iraqi network inside Syria helping Assad.

The Asai’b Ahl al-Haq in Syria is known as the “Kafal al-Zeinab Brigade” and numbers 500-600. The commander is named Abu Jabar and the operations commander is Haj Javad. There is a second unit named Kataeb Heidar Karrar in Syria.

Kataeb Hezbollah has a brigade named “Jondollah al-Sama” in Syria, commanded by an Iraqi from Sadr City named Haj Thamer.

There is also a brigade of about 400 from Sheikh Akram al-Ka’bi, another Iraqi group that split from Asa’ib Ahl al-Haq. It is named “Ammar Ibn Yasser” and has been sent to Aleppo.

Those that are killed are sent back to their country of origin to be buried.

US says IAEA may have to change Iran approach on ‘PMD’

AFP: After nine fruitless meetings with Iran over its...