Families of Ashraf residents demand US protection for loved ones, not hollow promises

PR Newswire: Iranian-Americans whose loved ones in Camp Ashraf, Iraq were executed one-by-one on September 1 by the Iraqi forces acting on orders from the Iranian regime, call on the US President to take immediate measures to provide the US-promised protection for thair loved ones in camps Ashraf and Liberty. 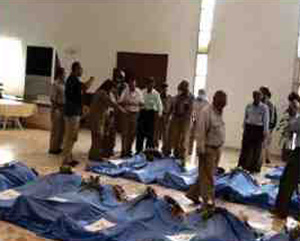 WASHINGTON /PRNewswire-USNewswire/ — The US Committee for Camp Ashraf Residents (USCCAR), on behalf of Iranian-Americans whose loved ones in Camp Ashraf in Iraq were executed one-by-one on September 1 by the Iraqi forces acting on orders from the Iranian regime, calls on the US President Barak Obama and Secretary of State John Kerry to take immediate measures to provide the US-promised protection for our loved ones in camps Ashraf and Liberty.

Until January 2011, Camp Ashraf was home to some 3,400 members and sympathizers of Iran’s principal opposition group, the People’s Mojahedin Organization of Iran (PMOI/MEK) and their families. Since then, the residents have been transferred to Camp Liberty near Baghdad Airport until they are re-settled in third countries. Some 100 residents remained behind according to a quadripartite agreement between the US, the UN, Iraq, and the residents to oversee their properties.

In the early morning hours of Sunday, September 1, Iraqi forces ambushed the camp and its 100 unarmed and defenseless residents. They bombed buildings and then went on a killing spree to finish off the wounded. Nine injured residents were murdered execution-style in the camp’s clinic. The Iraqi Forces executed 52 residents, six of them women. All the deceased “have suffered gunshot wounds, the majority of them in the head and the upper body, and several with their hands tied,” the UN said in a statement. This was a manifest case of War Crimes and Crimes Against Humanity.

Those killed had been formally recognized as “Protected Persons” under the Fourth Geneva Convention, by the US Government in 2004 and carried a photo ID card signed by the US Government officials which, in exchange for handing over their weapons of self-defense, guaranteed them protection until their final disposition.

After the illegal transfer of responsibility of protection of the residents to Iraqi Government – a de-facto puppet of the Iranian regime – in 2009, the US continued to refrain from taking effective measures to fulfill its official and written promise.

Since 2008, the US Government had been continuously forewarned by the US families of Camp Ashraf residents and by lawmakers and international humanitarian law scholars that the one and only intention of Iraq’s Nouri al-Maliki Government was to exterminate the residents at the behest of Iran’s religious dictatorship.

Since then, there has been no shortage of US Administration’s promises, pledges, and assurances. But five massacres later and 113 killed, none have been fulfilled.

While the Iraqi government must be punished, that does not diminish the US responsibility in this massacre, brought about by the State Department persistently reneging on its numerous written and official commitments to protect the residents of camps Ashraf and Liberty.

In a September 2 open letter to Secretary Kerry, a stellar roster of former US national security and policy officials lamented that “the State Department used us to broker the solution of a crisis and then abandoned its promises and assurances which we gave in our country’s name.”

Following the Sunday’s massacre at Camp Ashraf, the statement issued by the State Department expresses condolences “to the families of the victims and those who were injured in today’s violence.” This feckless statement makes the impression that rather than working to protect the living, the State Department prefers to shed crocodile tears for the dead and their families.

The US Government must now take the following measures if it does not want to find itself lamenting another round of massacres of our loved ones in camps Ashraf and Liberty in the coming days. It must:

Transfer residents of Camp Liberty and those still alive as of this writing in Camp Ashraf to the United States immediately;
Ensure that UN Blue Helmets are stationed in these camps until the residents are relocated out of Iraq; and
Condemn the Iraqi Government for the massacre committed in Camp Ashraf on September 1 and cut off US aid to it. Not a single dollar of US tax payers must be used by al-Maliki’s Government to commit War Crimes and Crimes Against Humanity.

Iran tells Muslims to target U.S., not Denmark, over cartoons