PRNewswire: In a major conference in the Parliamentary Assembly of Council of Europe, in Strasbourg on Monday, EU, U.S. and UN were called upon to intervene immediately to secure release of seven residents of Camp Ashraf who are taken hostage. 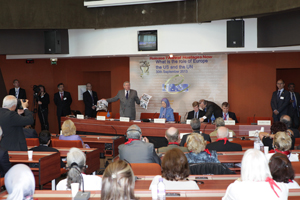 LONDON, October 1, 2013 /PRNewswire/ — In a major conference in the Parliamentary Assembly of Council of Europe, in Strasbourg, on Monday, September 30, EU, U.S. and UN were called upon to intervene immediately to secure release of seven residents of Camp Ashraf who are taken hostage. The event was organized by the British Parliamentary Committee for Iran Freedom (BPCIF).

The Iraqi forces murdered 52 residents of Camp Ashraf, all who were Iranian refugees, in mass execution and abducted seven of the residents as hostages on 1st of September. According to specific information and statements from international bodies, the seven hostages, six women and one man, are in severe condition in the hands of Iraqi security forces and face the serious threat of being handed over to Iran.

The meeting called upon Council and member states to demand that the government of Iraq free the hostages taken at Ashraf and to review their relation with Iraq should these demands not be met.

The participants demanded that a UN monitoring team together with a Blue Helmet unit must be stationed in and around Camp Liberty, place of residence of 3,000 Iranian dissidents in Iraq, at all times. They underscored that the Secretary-General and the High Commissioner for Human Rights should conduct an independent investigation into the September 1st atrocity and bring the perpetrators to justice.

They called upon the Parliamentary Assembly of the Council of Europe to appoint a Rapporteur to conduct an independent probe which could help to end harassment, violence, and murder perpetrated against both Iranians in exile and in Iran.

In her speech, Mrs Rajavi said the tactics of Nouri al-Maliki, the Prime Minister of Iraq and Faleh Fayaz, the National Security Advisor to the Government of Iraq is to create havoc on the hostages by constantly moving them around such that when the address of one prison is revealed and UN demands a visit, the prison would be empty, allowing the Iraqis to claim that the hostages are not in their hands.

Mrs. Rajavi emphasized that because of the information we have given to UN and U.S., they know well that the attack on Ashraf was carried out by Maliki and that the hostages are also in his hands. If they want and if they decide to live up to their repeated and constant commitments concerning safety and security of the residents, they can question Maliki and obligate him to keep to his international commitments which would lead to the expeditious release of the hostages or to the handing them over to a European country.

The meeting pointed out that member states should find ways of accepting Liberty residents. Delays by European countries in this matter especially that of refusing to admit 900 residents who are refugees in their countries, is shameful and should be ended.

The speakers expressed solidarity with Camp Liberty residents who are on hunger strike in protest to the massacre of September 1 in Ashraf and taking of their seven colleagues hostage together with those in various countries throughout the world who are staging sit-ins in support of Camp Liberty residents, emphasizing that they will spare no efforts to ensure the release of the hostages and the safety of the residents of Camp Liberty.

British MP: Iran Regime Is the Number One State Sponsor of Terrorism