Lord Clarke of Hampstead condemns Iranian president as a “butcher”

Ham & High: Life peer Lord Anthony Clarke, a former Labour Party chairman, joined a panel of cross-party MPs and political organisations to speak out against the Iranian government at a conference held by the British Parliamentary Committee of Iran Freedom.
Ham & High 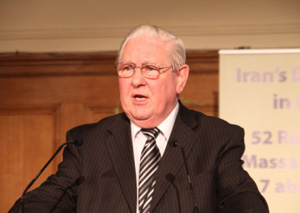 Lord Clarke of Hampstead called on the government to demand an end to alleged repression and executions by the Iranian regime at a conference on Monday.

Life peer Lord Anthony Clarke, a former Labour Party chairman, joined a panel of cross-party MPs and political organisations to speak out against the Iranian government at a conference held by the British Parliamentary Committee of Iran Freedom.

Several hunger strikers, protesting against killings at Camp Ashraf two months ago, watched the conference from the front row wearing placards emblazoned with the number of days they have refused food.

The 81-year-old said: “The world is in the process of being lulled into a false sense of security by a so-called president who has a pedigree of being a butcher.

“I was delighted with the meeting, which shows the level of solidarity of organisations who are prepared to speak out about what is going on, many who have families who are the subject of a dreadful regime.”

The panel also condemned a lack of “proper protection” for Iranian dissidents held in Iraqi camps since the 1980s and the alleged holding of seven hostages by Iraqi forces.

They demanded that US President Barack Obama call off a planned meeting with Iraqi Prime Minister Nouri al-Maliki in Washington this week, saying that Mr Obama should not agree to meet Mr Maliki until he pledges to protect 3,000 Iranian dissidents in Camp Liberty and releases the hostages.

Lord Clarke said: “My colleagues and I are trying to get a proper debate about the situation of those in Iraq’s Camp Liberty, which I have described as a concentration camp.”

The panel’s intervention follows the massacre of at least 47 people at Camp Ashraf, near the Iraqi capital Baghdad, last month.

Members of the British Parliamentary Committee for Iran Freedom believe the 47 were killed by Iraqi forces on the orders of the Iranian government.

The Iraqi government denies any involvement in the killings.

A statement from Mr Maliki’s office said: “The Iraqi government stresses the need for help to deport… [those] who are on Iraqi soil illegally, but at the same time confirms its commitment to the safety of souls on its territory.”

Hundreds of Iranians are on hunger strike to press Mr Maliki into releasing the alleged hostages and to demand the stationing of United Nations forces at Camp Liberty to try to prevent another attack like the one at Camp Ashraf.