USA TODA: The area is said to be in a series of tunnels in a military complex. An Iranian dissident group says that Iran should grant United Nations inspectors immediate access to a site it alleged Monday is a newly-discovered undeclared site for Iran’s nuclear work.

The area is said to be in a series of tunnels in a military complex. 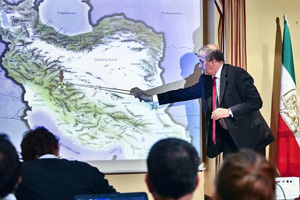 An Iranian dissident group says that Iran should grant United Nations inspectors immediate access to a site it alleged Monday is a newly-discovered undeclared site for Iran’s nuclear work.

“This should be a priority for the IAEA to get access immediately,” said Alireza Jafarzadeh, Washington spokesman for the National Council of Resistance of Iran, referring to a series of tunnels in a military complex the group announced Monday.

The group alleged that sources who work in various Iranian government agencies provided information showing that “the clerical regime is establishing or completing parallel secret and undeclared sites for its nuclear project,” another NCRI official, Mehdi Abrichamtchi, told reporters in Paris Monday, according to Reuters.

The new site is inside an 1,800-foot tunnel complex beneath mountains six miles from the town of Mobarekeh, adjacent to a highway and within the Haft-e Tir military industrial complex, according to Abrichamtchi .

Proliferation experts have speculated based on Iranian official statements that Iran has additional secret nuclear sites. Such a discovery could complicate nuclear talks between Iran and world powers that are due to resume Wednesday in Geneva.

The United States, United Kingdom, France, Germany, Russia and China are meeting with Iran in an effort to complete a deal that would limit Iran’s nuclear activities and provide some sanctions relief while negotiations continue on its nuclear program.

The United States, Israel and other countries suspect Iran is developing a nuclear weapons program. World powers have imposed crippling economic sanctions to persuade Iran to prove its program is for peaceful purposes as it claims. Access to secret and now-off-limits military sites is among Western demands.

Abrichamtchi had few details on how the site is being used but said it is managed by Iran’s Organization of Defensive Innovation and Research, which handles Iran’s sensitive nuclear activity. Work on the site began in 2005, with tunnel construction ending in early 2009 and other work at the facility was completed recently, he said. 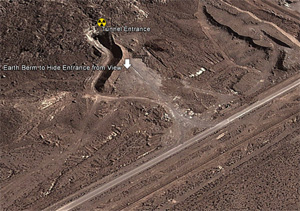 Satellite imagery shows the entrance to what an Iranian dissident group says is an underground nuclear installation near Mobarekeh, Iran.(Photo: National Council of Resistance of Iran)

That military compound is where Iran has manufactured some of the most sensitive and hard-to-produce components for its centrifuges and rocket casings , said Olli Heinonen, a former deputy director general of the United Nations nuclear watchdog, the International Atomic Energy Agency.

The manufacturing equipment is expensive and hard to procure under current export controls, and Heinonen said he “wouldn’t be surprised someone would put them underground to protect them” from a potential military strike.

NCRI, which seeks the downfall of Iran’s Islamic regime, has previously exposed secret nuclear facilities under construction in Natantz, under a mountain in Fordow and in the city of Arak. In October, NCRI alleged that the Iranian military had moved a program devoted to weaponizing nuclear technology from a known site to a more secure and secretive one in Tehran.

The existence of a secret Iranian site containing 3,000 advanced centrifuges for producing nuclear fuel was theorized in an October report by the Institute for Science and International Security, a Washington think tank founded by David Albright, one of the USA’s top proliferation experts. The report estimated how long it would take Iran to secretly produce enough uranium for a bomb without detection by international monitors, the so-called breakout capacity. Albright’s report considered various scenarios, including with a theoretical covert site for centrifuges that produce such fuel.

“Though no concrete evidence of construction of a covert facility has emerged, official Iranian statements imply that a gas centrifuge plant is under construction,” according to the October report.

Iran announced in 2009 plans to build up to 10 centrifuge facilities. The following year, 2010, Iran’s top nuclear official at the time, Ali Akbar Salehi, said location studies were complete and that construction on one of those facilities would begin within a year, according to news accounts.

Iran’s next nuclear chief, Fereydoun Abbassi-Davani, said in mid-2011 that construction on additional enrichment plants was delayed by two years, according to the Institute for Science and International Security report.

“Based on this timeline, Iran may be constructing a facility that could dramatically impact its ability to break out,” Albright wrote.

Whether the site is involved in illicit nuclear activities is unclear based on the scant information provided by NCRI, but Iranian plans for additional centrifuge sites does raise important questions, he said.

“One of the biggest questions at this point is are these only plans or have the plans already been executed.” Heinonen said. “Are these plans on paper, or plans where someone’s digging a hole somewhere or are they installing machines somewhere?” Heinonen said. “It would be important from the beginning of the negotiating process to know where the centrifuges are, to know if there is another centrifuge site other than Natanz or Fordow, is there a stockpile of centrifuges somewhere or are they enriching somewhere we don’t know.”

New York Times: When voters go to the polls...