Sky News: I’d been slumped in an armchair in the lobby of the Intercontinental Hotel in Geneva for several hours when suddenly nothing happened. The Iran nuclear talks dragged on. And on. And nothing happened.
Hell can be other journalists, especially when they ask you to speculate on what is going to happen when no one really knows. 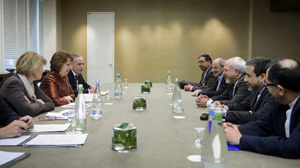 I’d been slumped in an armchair in the lobby of the Intercontinental Hotel in Geneva for several hours when suddenly nothing happened.

The Iran nuclear talks dragged on. And on. And nothing happened.

Luckily, I was prepared for the moment and so phoned in the news to the Sky’s foreign desk back in London.

As nothing continued to happen, the desk asked the inevitable, justifiable and yet pointless question: “What is going to happen?”

The answer to this often posed question is simple: “I’ll tell you when it happens.”

This rarely satisfies the inquisitive desk, which needs to go into meetings later in the day to answer the same question asked by people trying to plan news coverage and work out how much things will cost.

At this point, to help, you can speculate about what will happen, and some of that may, or may not, eventually come true.

Either way, this allows the desk to be able to go to the meetings and also speculate. All parties are then satisfied and the waiting can continue.

Sartre was wrong. Hell is not other people. No, hell is other journalists seizing upon every cough and sneeze from delegates from six delegations, most of whom are not in the room during negotiations, and analysing what each sneeze or cough means.

Some of this is due to a genuine interest in the minutiae of the story, but usually it is to try and work out whether or not they can catch the evening flight home, or whether they have to stay another night.

So if the French say X, journalists nod wisely and say: “Ah, that means they think they are closer and can wrap things up.”

But then the Brits say Y and this Y can be taken to mean the opposite of X, leading to the conclusion that actually when the Russians said Z, it must have been true.

Some of us speculate that the French are putting a spanner in the agreement. Others say they are just pretending and are playing bad cop because the Americans are asking them to.

Meanwhile the Iranians are either packing their bags and are ready to leave or, given the number of bags in the vicinity of the Iranian press corp, are clearly not leaving.

One colleague calls this the “Iran luggage Index”.

He earns my respect as happily he is only joking and has done enough of the “suddenly nothing happened” stories to know it is utterly pointless to engage in this endless guessing and that we already know when we will be going home.

We will be going home when the story is over and no one, not even those in the negotiating room, knows when that will be.