Reuters: Iran and six world powers clinched a deal on Sunday curbing the Iranian nuclear program in exchange for initial sanctions relief, signaling the start of a game-changing rapprochement that could ease the risk of a wider Middle East war.

By Parisa Hafezi and Justyna Pawlak 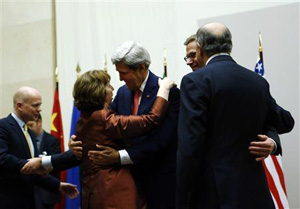 GENEVA (Reuters) – Iran and six world powers clinched a deal on Sunday curbing the Iranian nuclear program in exchange for initial sanctions relief, signaling the start of a game-changing rapprochement that could ease the risk of a wider Middle East war.

Halting Iran’s most sensitive nuclear work, its higher-grade enrichment of uranium, it was tailored as a package of confidence-building steps towards reducing decades of tension and banish the specter of war over Iran’s nuclear aspirations.

European Union foreign policy chief Catherine Ashton, who has been coordinating diplomatic contacts with Iran on behalf of the major powers, said it created time and space for follow-up talks on a comprehensive solution to the dispute.

“This is only a first step,” said Iranian Foreign Minister and chief negotiator Mohammad Javad Zarif. “We need to start moving in the direction of restoring confidence, a direction which we have managed to move against in the past.”

Hard-pressed by sanctions, many Iranians were elated by the breakthrough and prospect of economic improvement. The Iranian rial currency, decimated earlier this year due to sanctions, jumped more than 3 percent on news of the deal on Sunday.

Obama said that if Iran did not meet its commitments during the six-month period covered by the interim deal, Washington would turn off the tap of sanctions relief and “ratchet up the pressure”.

But Israeli Prime Minister Benjamin Netanyahu condemned the deal as it left the nuclear fuel-producing infrastructure of its arch-foe intact. “What was achieved last night in Geneva is not a historic agreement, it was a historic mistake,” he said.

“Today the world has become a much more dangerous place because the most dangerous regime in the world took a significant step towards obtaining the world’s most dangerous weapon,” he said in public remarks to his cabinet.

Nevertheless, the big power foreign ministers appeared relieved and elated after Ashton read out a statement proclaiming the deal in the middle of the night at the United Nations office in Geneva.

The West has long suspected that Iran has been seeking covertly to develop a nuclear weapons capability. The Islamic Republic, a major oil producer, denies that, saying its nuclear program is a peaceful quest for an alternative source of electricity to serve a rapidly expanding population.

The United States said the deal halts advances in Iran’s nuclear program, including construction of the Arak heavy-water reactor that deeply worries the West as it could yield plutonium, another atomic bomb ingredient, once operational.

It would neutralize Iran’s stockpile of uranium refined to a concentration of 20 percent, which is a close step away from the level needed for weapons, and calls for enhanced, more frequent U.N. nuclear inspections, a senior U.S. official said.

A U.S. fact sheet said Iran has also committed to suspending enrichment above a fissile purity of 5 percent – the threshold suitable for running nuclear power stations, which is Iran’s stated purpose. Refined uranium also provides the fissile core of an atomic bomb if refined to a high degree.

In return, Iran could obtain access to $1.5 billion in revenue from trade in gold and precious metals and the suspension of some sanctions on its automotive sector, and see its petrochemical exports revive.

But Iranian oil exports would remain for now at their currently significantly reduced levels. “$4.2 billion from these sales will be allowed to be transferred in installments if, and as, Iran fulfils its commitments,” a White House fact sheet said.

Much of the sanctions infrastructure, anchored by a Western embargo on Iranian crude oil and a ban on Iranian use of the international banking system, would remain in place pending a final deal aimed at removing all risk of an Iranian atom bomb.

“The approximately $7 billion in relief is a fraction of the costs that Iran will continue to incur during this first phase under the sanctions that will remain in place,” the White House document said. “The vast majority of Iran’s approximately $100 billion in foreign exchange holdings are inaccessible or restricted.”

Relief from sanctions is to begin in two to three weeks, Iran’s Mehr news agency quoted Zarif as saying.

The deal does not recognize an Iranian right to enrich uranium, U.S. officials said.

Leaders of the Islamic Republic, nevertheless, welcomed the accord and insisted it did amount to a recognition of what they say is Tehran’s right to enrich uranium.

“This can be the basis for further intelligent actions. Without a doubt the grace of God and the prayers of the Iranian nation were a factor in this success,” Khamenei, who has the ultimate say on policy in Iran, wrote in a letter to President Hassan Rouhani published by the state news agency IRNA.

Rouhani, a moderate elected by a landslide in June promising “constructive engagement” with the world and relief from sanctions, said the “outcome of these negotiations is that the … world powers have recognized Iran’s nuclear rights”.

Rouhani’s attempts to repair diplomatic bridges broken by his bellicose predecessor Mahmoud Ahmadinejad and his success in winning the backing of Khamenei reignited negotiations which had dragged on inconclusively, with the two sides talks reciting irreconcilable positions to each other, for 10 years.

“Ultimately, it is the Iranian people and the American people who deserve the most credit. Both are responsible for this initial victory by rejecting defeatists who said that a brighter future was not possible (and) diplomacy could not succeed,” said Trita Parsi, president of the National Iranian American Council (NIAC) think-tank.

But many obstacles remain, he cautioned. “Hardliners in both countries will work harder than ever to sabotage this pivot towards a diplomatic path. Those whose only currency is confrontation will search for any opportunities they can find to undermine and sabotage this interim deal.”

For now though, many Iranians were joyful. A post in Farsi by Zarif announcing the deal on his Facebook page received 47,979 “likes” in two hours. There was an outpouring of gratitude and many described him as a “national hero”.

“Dear Doctor Zarif … Your efforts have filled the hearts of the whole nation with happiness,” wrote Shayrin Shamshirband.

“I am writing this comment with my eyes filled with tears. Thank you for everything … After many years, you have returned happiness to the people. You have restored hope in our hearts and pride in my country,” commented Mehrnoosh Mohebi.

Kerry said the agreement would make it harder for Iran to make a dash to build a nuclear weapon and would make Israel and other U.S. allies safer.

He also told a late night Geneva news conference that while Obama would not take off the table the possible use of force against Iran, he believed it was necessary first to exhaust diplomacy.

He said the limited sanctions relief could be rescinded.

Kerry and the foreign ministers of the five other powers piled into the negotiations early on Saturday as the two sides appeared to be edging closer to a long-elusive agreement.

France’s Fabius said: “After years of blockages, the agreement in Geneva on Iran’s nuclear program is an important step to preserving security and peace.”