AFP-The Iranian opposition in exile asked again on Saturday that the Western powers to stand firm against Tehran, two days before a meeting in Vienna to discuss the implementation of the agreement limiting nuclear activities Iran. 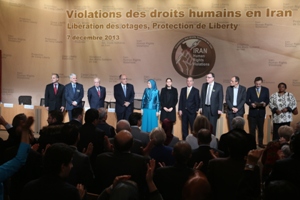 Paris (AFP) -The Iranian opposition in exile asked again on Saturday that the Western powers to stand firm against Tehran, two days before a meeting in Vienna to discuss the implementation of the agreement limiting nuclear activities Iran.

“The ruling regime, weakened and at an impasse, was forced to take a step back in its nuclear bomb-making program,” said Maryam Rajavi, President-elect of the National Council of Resistance of Iran (NCRI opposition in exile) at a conference in Paris.

She said, however, that the agreement reached in Geneva in late November included “unjustified loop holes.”

Iran is accused by the West and Israel of wanting to develop nuclear weapons under cover of a civilian nuclear program. Tehran denies the charges and says its program is purely peaceful purposes.

“But we must not conclude that it has abandoned building the atomic bomb. For the Supreme Leader , negotiation and agreement are tactical and not a substantive change, or a waiver of a strategy,” said Maryam Rajavi, emphasizing that a “firm policy vis-à-vis the regime is necessary ” and particular demanding that Iran be forced to accept the principle of surprise inspections and dismantling of all nuclear sites .

The NCRI President-elect (in which the People’s Mojahedin are the main component), was speaking alongside several American guests, including former New York Mayor Rudy Giuliani and former National Democratic Party Chairman, Howard Dean.

Three days before the International Day of Human Rights, Maryam Rajavi also denounced the situation in Iran, where these rights “are buried alive by the religious fascism ruling mullahs.”

“These past 11 months, according to Amnesty International, 600 people were executed in Iran by the mullahs. Approximately 400 people were hanged after the inauguration of Mullah Hassan Rouhani,” the new Iranian president deemed moderate, said Mrs. Rajavi.

Reuters: Japan is considering a new law to provide...