AFP: A retired FBI agent who disappeared more than six years ago during a visit to an Iranian island in the Gulf is not incarcerated in Iran, the country’s foreign minister said Sunday. 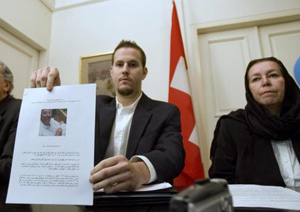 Washington (AFP) — A retired FBI agent who disappeared more than six years ago during a visit to an Iranian island in the Gulf is not incarcerated in Iran, the country’s foreign minister said Sunday.

Robert Levinson was in the news here this week following reports by the Associated Press and the Washington Post that the CIA had been paying him to gather intelligence.

The US government had repeatedly said that Levinson was on a business trip when he disappeared on Kish Island, a tourist destination.

“What we know (is) that he is not incarcerated in Iran,” Zarif said in an interview with CBS’s “Face the Nation.”

“If he is, he’s not incarcerated by the government, and I believe the government runs the, pretty much, good control of the country,” he added.

Asked whether Iran would return him if he was found, Zarif said, “If we can trace him and find him, we will certainly discuss this.”

On Friday, the White House insisted Levinson was not a US government employee when he went missing in Iran.

Secretary of State John Kerry raised Levinson’s case with Zarif during nuclear talks in Geneva and reiterated the US call for Tehran to help the retired FBI agent get home, the State Department said this week.

“I can’t tell you what happened or how the sequence was, but I think the Iranian government has the ability to help us here, and we hope they will,” Kerry said in an interview aired Sunday by ABC’s “This Week.”

Kerry said the US government was looking for proof that Levinson is alive.

The last videos and pictures showing him alive surfaced in 2011.

“We’re working on several processes that I’m not free to talk about. But there are a number of different channels that are being worked aggressively,” Kerry said.

New York Times: It was Secretary of State Hillary...