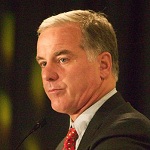 Former Democratic presidential candidate Howard Dean spoke out against the Obama administration’s nuclear deal with Iran at a Capitol Hill briefing held by a controversial Iranian dissident group on Wednesday.

The Washington Free Beacon reports Dean, the one-time Democratic National Committee chair, criticized the United States for not exerting more pressure on Iran’s poor human rights record, including the resettlement of some 3,000 members of an Iranian opposition group, the People’s Mujahideen-e Khalq or MEK, who are living at Camp Liberty, a former U.S. military installation in Iraq.

“We need to stand up to the mullahs. These are not people we ought to be negotiating with,” said Dean, one of the few progressive leaders to publicly oppose the deal.

“We ought to sign no agreement until these 3,000 [Camp Liberty refugees] are safe,” he said.

Dean warned if Tehran backed down from the deal over its human rights record, the regime is “most likely going to kill the negotiations as soon as they get out of the economic problems their sanctions are causing them.”

The White House has likened opposition to the talks as “a march to war.”

President Obama’s former national security adviser Gen. James Jones also spoke at the briefing. He called for the administration to protect Camp Liberty from Iranian attacks. He said the Iranian government “doesn’t want [MEK] to leave Iraq because having them all in one place makes them very easy to target.”

He also praised the Obama administration’s efforts on the Israel-Palestinian peace process, saying that it “remains at the epicenter of what needs to be resolved” in the Middle East.

Irans president changes ambassador to IAEA as purges go on