is a Syrian-made munition that can launch a 375-pound warhead as far as 125 miles. These rockets had been loaded on a freighter in the Iranian port of Bandar Abbas and were destined for Gaza. 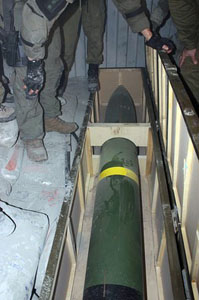 The M-302 rocket is a Syrian-made munition that can launch a 375-pound warhead as far as 125 miles. In a Red Sea raid Wednesday, Israeli naval commandos intercepted a shipment of these rockets that had been loaded on a freighter in the Iranian port of Bandar Abbas and were destined for Gaza. The rockets would have put most major Israeli cities within striking distance. Iran denies sending the weapons, which happened to be disguised among cement bags labeled “Made in Iran.”

A Syrian made M-302 missile after it was seized by Israeli troops at the Red Sea. IDF/European Pressphoto Agency

The interception of the Panamanian-flagged ship, called the “Klos-C,” is not the first time Israel has hooked a deadly Iranian cache at sea. In 2009, Israel found 500 tons of weapons on a cargo ship destined for Hezbollah in Lebanon. In 2002, the seizure of the Gaza-bound Karine-A ship, loaded with Iranian arms for Yasser Arafat, persuaded the Bush Administration that the Palestinian leader was actively abetting terror against Israel.

The seizure of the ship is a reminder that the aims and methods of Iranian foreign policy remain unchanged despite the alleged moderation of President Hasan Rouhani. It also suggests the possibility that Hamas, which governs Gaza, maintains a military relationship with the regimes in Damascus and Tehran despite its claims to have severed ties after the Syrian uprising began in 2011 and Bashar Assad started massacring Palestinians along with everyone else.

As Israel’s commandos were boarding the ship, Iranian Foreign Minister Mohammed Javad Zarif was in Tokyo, where he said Iran would not close its reactor in Arak as part of a nuclear deal with the West. The only practical purpose for that reactor is to produce plutonium for atomic weapons. If the Administration won’t draw conclusions from what the Iranians do in secret, is it too much to ask that it draw conclusions from what they say in public?