Iran gets an unlikely visitor, an American plane

New York Times:  Iran had an unlikely visitor: a plane, owned by the Bank of Utah, a community bank in Ogden that has 13 branches throughout the state. Bearing a small American flag on its tail, the aircraft was parked in a highly visible section of Mehrabad Airport in Tehran. 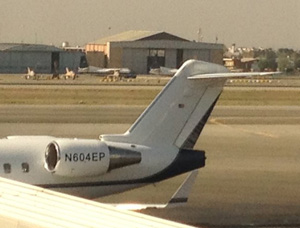 President Obama has warned that Iran is not open for business, even as the United States has loosened some of its punishing economic sanctions as part of an interim nuclear pact.

Yet on Tuesday morning, Iran had an unlikely visitor: a plane, owned by the Bank of Utah, a community bank in Ogden that has 13 branches throughout the state. Bearing a small American flag on its tail, the aircraft was parked in a highly visible section of Mehrabad Airport in Tehran.

But from there, the story surrounding the plane, and why it was in Iran — where all but a few United States and European business activities are prohibited — grows more mysterious.

While federal aviation records show the plane is held in a trust by the Bank of Utah, Brett King, one of its executives in Salt Lake City, said, “We have no idea why that plane was at that airport.”

He said that the Bank of Utah acted as a trustee for investors who have a financial stake in the plane and that the bank was investigating further.

The Federal Aviation Administration said it had no information about the investors in the aircraft or who was operating it. Officials waiting at the gangway at Mehrabad Airport said only that the aircraft was “V.I.P.”

The Treasury Department’s Office of Foreign Assets Control, the federal government’s primary enforcer of sanctions against Iran, declined to comment on the plane’s presence there. Under United States law, any American aircraft would usually need prior approval from the department to go to Iran without violating a complicated patchwork of rules governing trade.

In the case of this particular aircraft, powered by engines made by General Electric, the Commerce Department typically would have to grant its own clearance for American-made parts to touch down on Iranian soil.

Iranian officials also declined to comment on the purpose of the plane’s visit or passengers’ identities. A spokesman for Iran’s United Nations mission in New York, Hamid Babaei, said: “We don’t have any information in this regard. I refer you to the owner.”

The tracking of planes has become a kind of global sport, as largely amateur photographers post thousands of images showing arrivals and departures in their attempts to chronicle flight paths. In the case of this plane, for example, one spotter spied it leaving an airport in Zurich around the time of the World Economic Forum in Davos, Switzerland, held in January. Another photographer tracked the plane, identified by its call letters N604EP on the tail engines, departing a London-area airport for Ghana last October.

But this week’s spotting by a New York Times reporter in Tehran carries particular intrigue because it involves Iran, a country still effectively shunned by the global financial system.

Even some former federal officials, who spoke on the condition of anonymity, said the very presence of an American-flagged aircraft parked in broad daylight suggested its flight had been approved as part of a legitimate business trip. What is more, they said, the easily identifiable plane was not likely to be part of a covert diplomatic mission.

The secrecy surrounding the plane is compounded by federal aviation regulations that can make it virtually impossible to determine who was flying it.

The private plane, like thousands of similar ones, is owned through a trust — a complex legal structure often established to help foreign individuals or corporations invest in planes that can fly freely within the United States. Aside from that benefit, the structure enables investors and operators to remain largely anonymous to the public. The trustee — in this case, the Bank of Utah — is the sole entity recorded as owner in a vast database maintained by the Federal Aviation Administration.

Mr. King, who helps run the bank’s trust services business, said the bank had no “operational control” or “financial exposure” to any of the planes.

He said he was not allowed to disclose the identity of the plane’s investors. “As fiduciary, we must keep information confidential when it comes to the beneficiary,” Mr. King said.

While the trusts allow celebrities and corporate executives to travel discreetly, they also help obscure who is operating vast fleets of aircraft and why.

The shadowy role of American banks in private aircraft ownership has grown even as financial regulators work to shine a light on Wall Street’s activities, a legacy of the 2008 financial crisis.

Bank dealings with Iran in particular are subject to extraordinary scrutiny by the United States government, part of a broader crackdown on the flow of money to foreign countries and individuals that American officials say is tied to terrorism.

The British bank HSBC, for example, reached a record $1.92 billion settlement with federal authorities in 2012 to resolve accusations that it funneled billions of dollars on behalf of Iran and enabled Mexican drug cartels to move tainted money through its United States subsidiaries.

Even before the current sanctions, American aircraft rarely landed in the country. The animosity between the two countries has grown so intense that even the occasional emergency landing by a United States commercial airliner sets off a flurry of speculative news reports.

For his part, Mr. King said Thursday in an interview that he was trying to get to the bottom of the aircraft’s presence in Tehran. “The Bank of Utah is very conservative, and located in the conservative state of Utah,” he said. “If there is any hint of illegal activity, we are going to find out and see whether we need to resign” as trustee.

Iran says Muslim world must hit back at Israel for Gaza

AFP: Islamic countries must close ranks and respond to...

Iran Cannot Be Part of Peace Talk in Yemeni Civil War; They Caused the Civil War