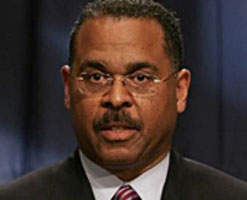 As more Iranian citizens are put to death in Iranian jails or subjected to long imprisonment for dissent and activism, a major rally this week in Paris can be a voice to affect U.S. policy, former U.S. Ambassador Ken Blackwell says.

“If you are paying attention to the Middle East, and thus to Iran, it would be prudent to also pay attention to France later this week. If you keep your eyes on Paris on June 13, you will witness to a powerful demonstration of opposition to Tehran’s clerical regime.”

In an article published in Townhall Amb. Blackwell said: “The rally organized by the Iranian Diaspora in support of the opposition National Council of Resistance of Iran is enormously relevant to questions about how Western policymakers should be dealing with the Islamic Republic during this complex time.”

“On June 13, the NCRI with the People’s Mojahedin Organization of Iran (Mek), the principal organized opposition at its core, will speak with one voice on behalf of these people and their long experience in fighting that regime.”

The NCRI used last year’s Paris rally as an opportunity to speak out against the optimistic and conciliatory tone of nuclear negotiations that still have not been resolved a year later. The NCRI emphasized that by giving away sanctions relief in response to very limited restrictions on the Iranian nuclear program, the West would be giving undue legitimacy to a government that has a long history of deception and that had been under severe pressure from both the international community and its own population.

Ambassador Blackwell argues: “For far too long, the Iranian people have been virtually absent from policy calculations and from the public consciousness when it comes to Middle Eastern affairs. The occasion of the June 13 gathering in Paris is an opportunity to correct this situation.”

He added “Given the prominence of discussions about Iran and its consequences, I think it will be wise to seek out all the news coverage that one can find of the event. It will be wise to familiarize yourself with Maryam Rajavi’s ten-point plan for the future of Iran, and listen to exiled Iranians’ as well as American politicians’ impassioned pleas for an end to the legitimization of terrorism and human rights abuses that emanate from the Tehran Ayatollahs.”