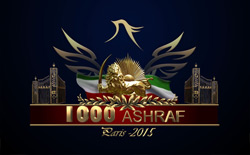 Organizers of the June 13 grand gathering in Paris in support of democratic change in Iran announced on Monday that a total of 330 Iranian associations have been involved in the event’s ongoing mobilization effort.

The mobilization campaign is being carried out in 345 cities from 24 countries throughout Europe, North America, Australia, the Indian sub-continent, the Middle East and North Africa.

In some countries, including France, Germany, UK, Poland, Czech Republic, and Netherlands, associations of local citizens and supporters of the Iranian Resistance are playing an important role in the mobilization campaign, the event organizers said.

The event’s insignia was unveiled on Monday.

Albania’s state radio-television symphony orchestra is scheduled to give a live performance at the event.

The mass rally in support of democratic change by the Iranian people and their organized Resistance will be attended by people from all strata of Iranian society as well as an array of distinguished international cross-party lawmakers and personalities.

They will voice opposition to the mullahs’ nuclear weapons projects and fundamentalist meddling and terrorism in the region, and they will declare their support for the 10-point platform of Iranian Resistance President-elect Mrs. Maryam Rajavi for a future free Iran.