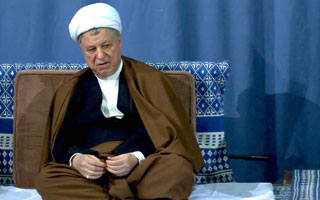 An Iranian committee is examining potential candidates to be the next Supreme Leader, former president Ali Akbar Hashemi Rafsanjani said on Sunday, breaking a taboo of talking publicly about succession in the Islamic Republic.

Even after Ayatollah Ali Khamenei, 75, had surgery for prostate cancer last year, public discussion over who would succeed him never gained momentum in official circles because of the risk of being seen to undermine Iran’s most powerful figure, Reuters wrote on Sunday. But with an election in February of the Assembly of Experts, the clerical body that appoints the Supreme Leader, such discussion is bound to come to the fore.

“The Assembly of Experts will act when a new leader needs to be appointed. They are preparing for that now and are examining the options,” Hashemi, a powerful ally of Iran’s President Hassan Rouhani, was quoted as saying by ILNA news agency on Sunday.

“They have appointed a group to list the qualified people that will be put to a vote (in the assembly) when an incident happens,” he added in rare comments acknowledging the process.

The assembly of 82 elected clerics is charged with electing, supervising and even disqualifying the Supreme Leader.

Over past decade, conservatives have gained more seats both in the Assembly of Experts and parliament, because all candidates are vetted by the Guardian Council whose most influential members are chosen directly and indirectly by the Supreme Leader to interpret the constitution.

The Supreme Leader is commander-in-chief of the armed forces and appoints the heads of the judiciary. Key ministers are selected with his agreement and he has the ultimate say on Iran’s foreign policy and nuclear program. By comparison, the president has little power.

Khamenei is only the second Supreme Leader of Iran, selected in 1989 when Ayatollah Khomeini died.

Rafsanjani also said the Assembly of Experts would be open to choosing “a council of leaders if needed” instead of a single Ayatollah who rules for life.

AFP: The United States on Thursday took a cautious...