Neither the will nor the capability for moderation 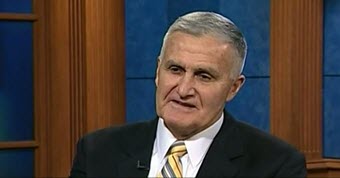 Gen. Hugh Shelton, former chairman of the U.S. Joint Chiefs of Staff, has written an article for the Washington Times, and is very critical of the role the U.S. has played vis a vis Iran. Shelton uses the word “irony” to describe the U.S. Iranian relationship. Across the board, the United States has shown leniency in the face of belligerence and used half-measures to confront adversaries who define extremism in both word and deed.

Since 2013, Mr. Rouhani “has neither the will nor the capability for promoting a moderate interpretation of Islam”, he writes. The Western allies have continued to hail his moderation, in the face of mass executions, criminalization of progressive social trends, and the persecution and arrest of Western nationals and journalists.

The U.S. has other options, it does not need to e support and praise a figure like Mr. Rouhani. There are Muslim individuals and groups who steadfastly embody the progressive sort of Islam that advocated a diverse, modern world. Shelton mentions the Iranian opposition leader Maryam Rajavi, leader of the National Council of Resistance of Iran, who has long promoted a 10-point plan for the future of the country, including principles such as free and fair elections, gender equality, and separation of religion and state.

These people who form the resistance against the tyrant regime advocate democracy and tolerance not just in words, but in deed. Are those not American values worthy of support? Yet, The Iranian opposition is kept at a distance, and the U.S. has turned a blind eye toward attacks on the Iranian expatriate community in Camp Liberty, Iraq.

“Needless to say, the reluctance to even protect the innocent in Iraq has been motivated by the desire of the United States and Europe to safeguard the Iran nuclear deal,” Shelton writes. However, there is room for optimism. Senate Armed Services Committee Chairman John McCain has pressed the administration to uphold its commitment to protect these dissidents.

Iran is clearly dangerous. In October and November, Iran tested two ballistic missiles capable of carrying nuclear warheads in violation of U.N. Security Council resolutions. The Nuclear Deal is already in jeopardy. The U.N. resolution governing the implementation of that deal also called for restrictions on Iran’s ballistic missile development and testing, for a period of eight years.

Shelton says that, “The contradictions of U.S. policy must give way to consistent, sober analysis and statecraft if we are to regain the upper hand and promote the regional stability and security we all seek.” Its about time that the U.S. treat the terrorist state as one, and nor rely on false promises of moderation.

By Jubin Katiraie Internet censorship in Iran has been...