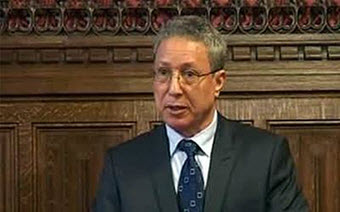 In an article published in the French daily Le Monde, writer Tahar Boumedra writes that Iran has a human rights problem that the regime refuses to acknowledge and address.

Boumedra is the author of “The human rights situation in Iran: a challenge for international law”, and is also the former director of the human rights office of the United Nations Assistance Mission for Iraq (UNAMI).

He writes that in his capacity as director of the Office of Human Rights of the United Nations in Baghdad he was able to closely monitor, in practice and theory, the actions of the Iranian regime. His findings were not good: “I find it incredible how Western governments, from a campaign whose promises remain to be met, engage in a race to mark their presence in Tehran and trigger lucrative contracts with a regime they consider to now be respectable.”

Like many who know even a bit about the situation in Iran, Boumedra is of the opinion that Hassan Rouhani is not a moderate as much as it is argued that he is. As president he promised to respect Iran international commitments and to respect the human rights of its citizens and he reneged on all promises. “Are we facing a mirage or reality?”
If ones looks at the constitution decreed by Supreme Leader Khomeini, its founding pillars are eternal and unchangeable. Attempting to reform them is a sin against God’s will. Thus, we are dealing with a “divine” system, a constitution that is not subject to reforms, since it is a “programmed constitution” decreed by the divine. It sets out the application of God’s “Sharia” law in all areas including in state relations where Sharia law prevails over international law (Article 4 of the Constitution). In other word, in the case of conflict between Iran’s international obligations and Sharia law, the supremacy of the latter prevails.

This means that there is no scope in Iranian Sharia law to accept ideas of individual right and free speech. It is at odds with the UN Charter which gives precedence to international law. Likewise, it can be a threat to peace and international security. It is a rejection of the Universal Declaration of Human Rights, the International Covenant on Civil and Political Rights, the Convention on the Elimination of All Forms of Discrimination against Women, the Convention on the protection of children, etc. Strange that western powers are negotiating with a country that has such obtuse laws.

Boumedra goes on to say that the state approve practices like amputations, stoning, crucifixion and mandatory death penalty following often unfair and discriminatory trials belong in a different ages. Yet the mullahs of Tehran are bent on creating nuclear arms and spreading of Islamic fundamentalism. The regime even has a constitutional obligation to put all means, including nuclear power, at the disposal of the Islamic army guards of the revolution and foreign intervention units such as al-Quds Brigade, to defend the Khomeini revolution and export it abroad.

The situation has to be addressed at the United Nations Security Council so they can take appropriate measures to stop the expansionism of Iran’s “vilayat e-faghih” vision. “Unfortunately, the current economic situation passing through our world has decided otherwise. The states whose influence can flex the fundamentalist regime and exporter of terrorism chose their own narrow, short-term interests,” he writes.

Iran has become a business opportunity, and this blurs the lines of what is legal according to international laws. States are overlooking its vast human rights abuses, for what? An uncertain future for themselves and Iranians? Iran’s current constitutional and political situation is unacceptable to democratic societies that respect human rights.

Iran cracks down on public eaters during holy month