No deal with Iran, US Congressman says 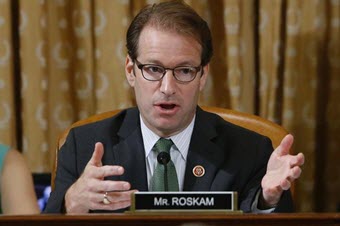 Washington, 31 Mar – Western businesses ought to avoid dealing with Iran or risk being named and shamed by the United States Congress, Rep. Peter Roskam, chairman of the US House of Representatives Ways and Means Subcommittee on Oversight wrote in The Wall Street Journal on Thursday.

The following is the full text of Roskam’s op-ed in The Wall Street Journal:

Don’t Be So Quick to Do Business With Iran
The U.S. Congress will use all the tools at its disposal to name and shame those who pursue profit at the expense of innocent lives.

It’s a good time to be a repressive Iranian theocrat. Relieved of most sanctions by President Obama’s nuclear deal, the mullahs have been flexing their muscles lately by firing ballistic missiles in violation of United Nations Security Council resolutions, capturing and humiliating American sailors, and firing rockets near U.S. ships. Meanwhile, Iran’s President Hassan Rouhani is currently on an international tour to convey a simple message to the West: The Islamic Republic is open for business.

Since the implementation of the Joint Comprehensive Plan of Action, Western companies have quietly started to explore business opportunities in a country some view as an emerging market with untapped potential. After years of sanctions and economic stagnation, Iran is welcoming foreign investment with open arms.

But Iran isn’t simply an emerging market with untapped potential. It’s also the world’s leading state sponsor of terrorism. It’s the supplier and manufacturer of improvised explosive devices deployed to kill and maim thousands of American and coalition troops in Iraq and Afghanistan. It’s the patron and partner of Bashar Assad in the slaughter of innocents in Syria, with nearly half a million killed so far.

Iran is a dangerous geopolitical foe led by a cult of extremists hell-bent on Western civilization’s annihilation. It should not be considered open for business.

As President Obama begrudgingly admitted, Iranians will almost certainly use some of their $100 billion sanctions-relief windfall to sow the seeds of even more death and destruction. The fingerprints of the Islamic Revolutionary Guard Corps will likely be found among the rubble.

More than a branch of the Iranian armed forces, the IRGC is a business empire. According to the U.S. Treasury Department, the IRGC is Iran’s “most powerful economic actor.” It represents around one-sixth of the country’s gross domestic product, controls hundreds of companies and dominates vast sectors of the economy. Outlays to the IRGC account for the majority of Iran’s defense budget. Taxes, oil revenue, tariffs and trade profits all flow directly into its coffers.

It’s impossible to do business in Iran without dealing with the IRGC. Consider Iran Air, the state-owned airline, which has long sought repairs and replacements for its aging fleet of Boeing and Airbus planes. The IRGC has used those same planes to transport fighters and weaponry to Syria. Mahan Air, ostensibly a privately owned carrier, is planning new routes to Paris and London. But Mahan, too, has been implicated in international terrorism and earned a Treasury Department designation for “providing financial, material and technological support” by “secretly ferrying operatives, weapons and funds on its flights.”

Western companies must not force their employees or shareholders to become accomplices to such crimes. As chairman of the Ways and Means Oversight Subcommittee, I will do everything in my power to prevent Iran from obtaining additional means, financial or otherwise, to bolster its support for terrorism. Congress won’t allow companies to receive foreign tax credits for levies paid to the Islamic Republic. Firms that enable Iranian terror may be hard-pressed to renew contracts with the Defense Department or other government agencies.

My colleagues and I will use all the tools at our disposal to name and shame the individuals and businesses that pursue short-term profit at the expense of innocent lives. These companies will need to choose between doing business with the U.S. and doing business with Iran.

Much like Islamic State, the Islamic Republic of Iran possesses a theology and eschatology fundamentally incompatible with peace and world order. It is my sincere hope the mullahs will end their support for terrorism and rejoin the community of nations. Until such time, Congress will neither relinquish its historic oversight role with regards to trade policy nor abrogate its responsibility to protect Americans from the threat of Iran’s brand of radical Islamic terror.

Mr. Roskam, a member of the U.S. House of Representatives from Illinois, is chairman of the Ways and Means Subcommittee on Oversight.

Reuters: Iran has provided the U.N. nuclear watchdog with...