Maryam Rajavi: Iranian workers will not achieve rights until regime is overthrown 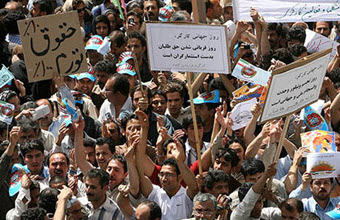 London, 1 May – Iranian workers will not “achieve their rights” unless the “clerical regime” is overthrown in Tehran, Iranian opposition leader Maryam Rajavi said in an address marking International Worker’s Day on Sunday.

Rajavi, President-elect of the National Council of Resistance of Iran (NCRI), said she hoped the current year would see a “restitution of the rights of millions of honourable workers” in Iran who have been laid off or forced to live in “fear, poverty and insecurity” because their wages are not paid or they are forced to work on the basis of temporary contracts.

Rajavi praised labour activists who are imprisoned in Iran.

The “nationwide resistance” and protests by workers indicate the fact that they rightly see the “ruling religious dictatorship” as the prime source of “oppression and violation of workers’ rights”, Rajavi said. “Therefore, the deprived workers of Iran will not achieve their rights unless the clerical regime is overthrown”.

Rajavi pointed out that Iranian workers have lost their jobs and livelihood in the course of the “unremitting trend of factories going bankrupt and the shutdown of 60% of industrial centres”.

The sale and fraudulent auctions of factories, the economic corruption and expansion of black markets, and the bankruptcy of banks and stepped-up import of foreign goods target Iran’s workers as their prime victims, Rajavi said. She added that the “treacherous policy” of allocating the “lion’s share” of the country’s revenues to the war and “massacre” in the region, especially in Syria, has made Iranian workers ever poorer and destitute.

For years, the minimum wage of Iranian workers has remained at one dollar per hour, Rajavi said, adding that according to officials in Iran, 60 percent of workers do not even receive their minimum wage.

Their purchasing power has plunged 187 percent since 2009, she pointed out.

Lay-offs and dismissals have intensified under Hassan Rouhani’s government, and workers who have not yet lost their jobs do not enjoy job security under the temporary job contracts, she said. “The greater majority of Iran’s work force work under such contracts which were designed to subjugate workers and compel them to accept cheap pay”, she added.

Addressing Iranian workers, Rajavi reiterated: The clerical regime and its various factions have built their subsistence on the plunder of your energy and livelihood. Nevertheless, their crisis-riddled regime is vulnerable to your solidarity and unity of action, despite its crackdowns. … Your struggle to gain your rights is a major part of the nation’s struggle to overthrow the mullahs’ religious tyranny.

The Hill: As the wave of sectarian bloodshed spreads,the Iranian-backed Nouri al-Maliki...

Washington Post: The number of roadside bombs and other...