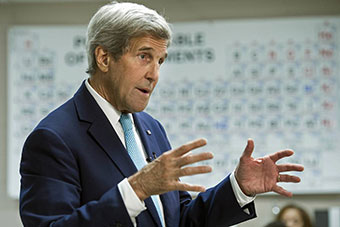 Washington, 4 Jun – United States Secretary of State John F. Kerry says he wants to find out “exactly what happened” with regard to the doctoring of a 2013 State Department news briefing video about the Iran nuclear deal — and that whoever altered the video was “stupid and clumsy and inappropriate.”

Mr. Kerry’s remarks came as two influential Republican lawmakers sought an explanation Friday for why the video record of the briefing by the department’s then-spokeswoman Jennifer Psaki was deliberately altered to delete her suggestion that officials had misled the public about when the controversial Iran nuclear negotiations had begun, The Washington Times reported on Saturday.

In a separate letter, sent directly to Mr. Kerry, House Oversight and Government Reform Committee Chairman Jason Chaffetz of Utah called on the department to “identify, by name and job title, the individual or individuals” who were involved in the tampering.

In a reversal from previous claims that a technical “glitch” had likely caused a portion of the video to disappear, current department-spokesman John Kirby acknowledged this week that the video had been intentionally altered.

But Mr. Kirby but offered few details beyond claiming that an unidentified US official had ordered the deletion.

On Wednesday, Mr. Kirby said officials with the department’s Office of the Legal Advisor had reviewed the video during recent weeks, after a Fox News journalist reported on the missing section. But the officials were unable to determine who had “made the request to edit to the video, or why it was made,” he said.

Mr. Kirby said only that a video editor, whom officials have declined to identify, made the cut after receiving a phone call from someone inside the State Department who ordered the action.

“It was three years ago and the individual who took the call just simply doesn’t have a memory of it,” he said.

The question of the timing and transparency of the administration’s diplomacy with Iran over its nuclear programs has reignited following a recent New York Times magazine profile of top Obama foreign policy adviser Ben Rhodes that suggested the administration pushed a false narrative of how the outreach to Tehran was handled in Mr. Obama’s first term.

The Dec. 2, 2013, State Department news briefing video now under scrutiny dealt directly with some of those matters and whether it was department policy to lie in order to preserve the secrecy of the nuclear negotiations.

The missing video section centered on an exchange in which Ms. Psaki seemed to admit that the administration had engaged in secret talks with Iran despite having publicly denied that such talks had occurred.

During the exchange, Fox News reporter James Rosen had referenced an earlier Feb. 6, 2013, briefing in which then-State Department spokeswoman Victoria Nuland had said there were no intermittent conversations between Obama administration and Iranian officials outside of larger multinational gatherings.

Mr. Rosen had asked Ms. Psaki if Ms. Nuland had been speaking truthfully or if it was acceptable to lie to protect the secrecy of the secret talks. In response, Ms. Psaki had said: “James, I think there are times where diplomacy needs privacy in order to progress.”

In an unusual twist, the corresponding print transcript of the altered video was never changed on the State Department’s website.

Ms. Nuland, meanwhile, has said she didn’t know about the secret talks at the time she denied they were happening in February 2013.

For her own part, Ms. Psaki tweeted on Wednesday that she “had no knowledge of nor would I have approved of any form of editing or cutting my briefing transcript on any subject while @StateDept.”

In his first remarks on the matter Friday, Mr. Kerry told reporters that he intends to uncover who was responsible. He also said the act of deliberately doctoring the public video record of news briefings runs against the transparency he’s stood for during his tenure at the department.

The secretary of state, in Paris for discussions on restarting peace talks between Israel and the Palestinians, said he “would like to find out exactly what happened and why.”

He also said he didn’t want someone like that working for him.

Iran’s educated sleeping on the streets

Reuters: A senior Central Bank of Iran official has...