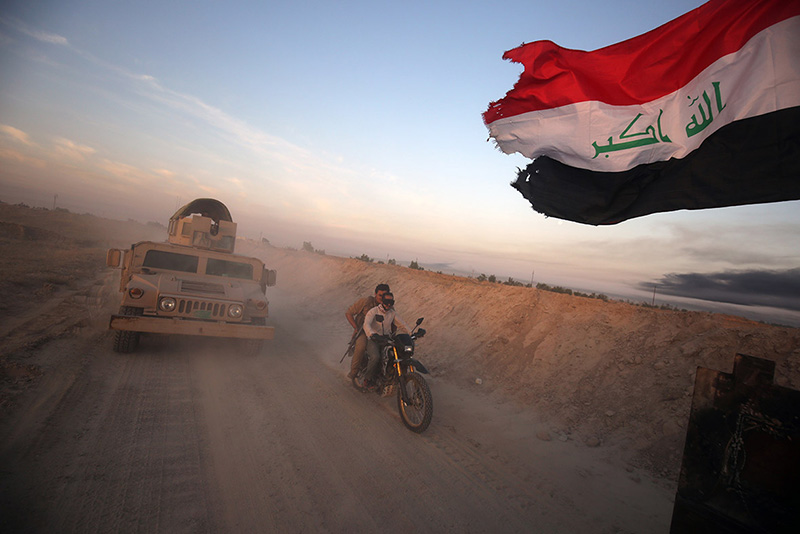 London, 4 Jun – The following is a statement, released on Friday, by the Brussels-based European Iraqi Freedom Association on the crisis unfolding in the Iraqi city of Fallujah.

THE SLAUGHTER OF THE INNOCENTS

Western policy in Iraq is aiding and abetting the slaughter of the innocents in Fallujah. This is the controversial view of Struan Stevenson, President of the European Iraqi Freedom Association (EIFA). Speaking as the operation to ‘liberate’ Fallujah from Daesh (ISIS) fanatics enters its second week, Mr Stevenson said: “We seem to have learned no lessons from the fate of Ramadi, which was ‘liberated’ from Daesh earlier this year, but the final onslaught during the battle for its recapture saw virtually every building in the city destroyed; only a handful of women, children and elderly men remained. Some estimates state that the population of Ramadi was reduced by the conflict from over one million inhabitants to less than 1,000. Thousands of innocent civilians lost their lives. The ruthless Shi’ia militias waged a genocidal campaign against the predominantly Sunni population of that city, torturing, burning and butchering men, women and children at will. They will do the same in Fallujah. Thousands of civilians will be killed. The UN estimates that up to 20,000 children are trapped in Fallujah; Daesh is using some as human shields, while others are being forced to fight; the Shi’ia militias will mercilessly butcher them.

“Militias affiliated with the Iranian regime, under the command of the Iranian terrorist Quds force leader Qassem Soleimani, are unilaterally leading the offensive and killing and slaughtering innocent civilians and burning houses and mosques and even beheading people in Fallujah. Seventeen militia groups under Iran’s command including the terrorist Badr organization with six thousand men, Asa’ib with five thousand men, Kata’ib with four thousand men, Imam Ali Kata’ib with three thousand men are taking part in this operation. Footage posted online shows militias chanting sectarian slogans after beheading 17 people in the Garmeh neighbourhood of Fallujah.

“This is while according to official figures, only four thousand Sunni troops, close to the government, are taking part in this battle. The Sunni forces do not have heavy arms and are therefore deployed mainly on the side-lines of the battle. The only way to defeat Daesh and free al-Anbar Province is to organize and arm the Sunni tribes and involve them directly in the liberation of their own territories. However, the influence from Iran, which now dominates Iraq, is preventing this from happening.

“Qais al-Khazali the head of the Asa’ib militias whose crimes have been repeatedly condemned by the international community has described Fallujah and its inhabitants as “a source of terrorism” describing it as a “cancerous tumour that must be uprooted.” The former Iraqi Prime Minister Nouri Al-Maliki, under whose term in office the sectarian genocide began, has described Fallujah as the “head of the snake.”

“Now the defenceless people of Fallujah are stuck between Daesh and the Iraqi militias. While the sectarian barbarities committed by the militias have created widespread condemnation both in Iraq and internationally, the al-Abadi government has unfortunately remained silent in dealing with these crimes. Sadly, the West has seen fit to assist in this holocaust by providing air strikes and bombing raids on the city. American & British airstrikes assisted in the recapture of Ramadi, crushing most of the city’s buildings and infrastructure to dust. Now warplanes from a US-led international coalition have begun bombing raids on Daesh targets around Fallujah.

“Western intervention in Iraq is being widely applauded by the mullah-led Iranian regime, which is financing, training and commanding many of the Shi’ia militias engaged in the battle against Daesh. The Iranian regime regards Daesh as a convenient vehicle for implementing its objective of ethnically cleansing the Iraqi Sunni population. By condoning this strategy, the West is relentlessly pushing Iraq’s hounded and oppressed Sunnis into an invidious position where they can either choose to support Daesh or die at the hands of the Shi’ia militias. We need to re-think Western policy and embrace Iraq’s Sunnis in a new and inclusive, Western-trained military force. The Iranian-led Shi’ia militias should be disbanded without delay and Iranian meddling in Iraq outlawed.”

Source: Reuters By: BABAK DEHGHANPISHED BAGHDAD – Among the...