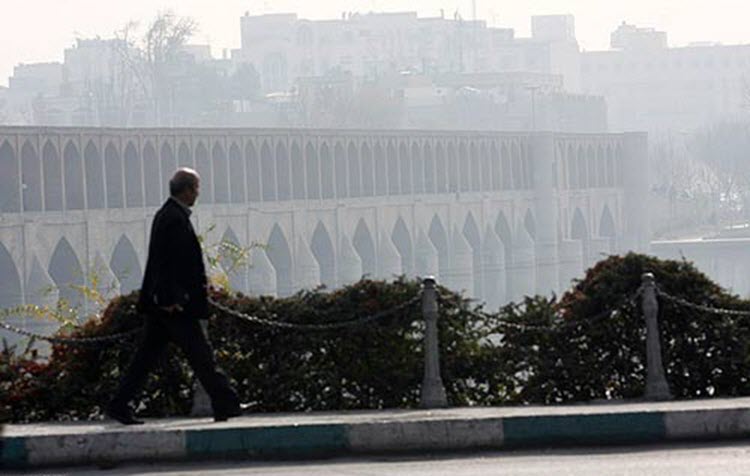 The report said: “The highly polluted weather in Isfahan stealthily brings slow death to the citizens.”

“Everyday citizens become a victim of air pollution in Isfahan. The continuing air pollution in city is the scourge to the people and if the concrete measures are not taken, the air pollution will bring a great disaster. In the past years, the level of air pollution especially in winter season increased dramatically. Only then, the relevant authorities gathered around a table to make temporary and short-term decisions for this critical and fundamental issue. Nowadays, the problem of air pollution is considered as the national and provincial health priorities and the ongoing efforts are being made to reduce it”, it added.

An official was quoted as saying: “The conducted research on children living in the city showed that exposure to air pollutants in childhood period dysfunctions the internal layers of the artery and it increases the predisposition to form clots in the arteries. The complications were confirmed through specialised diagnostic tests, including special ultrasonographies and blood tests”.

He added: “The air pollution reduces the absorption of healthy sunlight by the skin and thus it decreases the production of Vitamin D in body. The lack of vitamin D brings about skeletal complications and the incidence of many other diseases, including cardiovascular, hypertension and certain malignant diseases and autoimmune disorders such as multiple sclerosis (MS) disease.
The head of the Institute for primary prevention of non-communicable diseases in Isfahan University of Medical Sciences stated that the major source of vitamin D is made in human body when the skin is on exposure to certain wavelengths of sunlight and the vitamin is made in the skin layers”.

Two research studies carried out in Isfahan show the high level of air pollution as preventing the absorption of adequate Vitamin D.