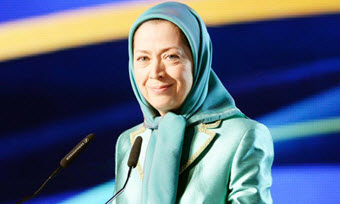 Paris, 12 Jul – In her speech on the second day of the hugely attended “Free Iran” conference held in Paris this past weekend, President-elect of the National Council of Resistance of Iran (NCRI), Maryam Rajavi said that ‘Operation Decisive Storm’, which aimed to prevent Iran’s expansion into Yemen forced the Iranian leaders to “drink the nuclear poison.”

Speaking before over 100,000 people attending the annual meeting in Le Bourget, near Paris, she urged UN Security Council resolutions, and called for a democratic, non-nuclear Iran.

According to the July 11 article in Arab News, “Radjavi said the Decisive Storm and the regional coalition against the aggression of Iran’s religious fascism in Yemen, the impact of the crippling sanctions as well as successive US Congress’ warnings ‘finally compelled the clerical regime to reluctantly take one more step back after 16 months of talks.’”

She went on further to explain that the retreat came from fear and pressure, and was a clear contradiction to the guidelines given by Ali Khamenei two weeks ago, and warned that “leniency and unwarranted concessions by the P5+1 to the least trustworthy regime in the world today only grants it more time and further aggravate the dangers it poses to the Iranian people, to the region and to the wider world.”

Minister under fire for fake degree

AFP: The university lecturer killed in a bomb blast...