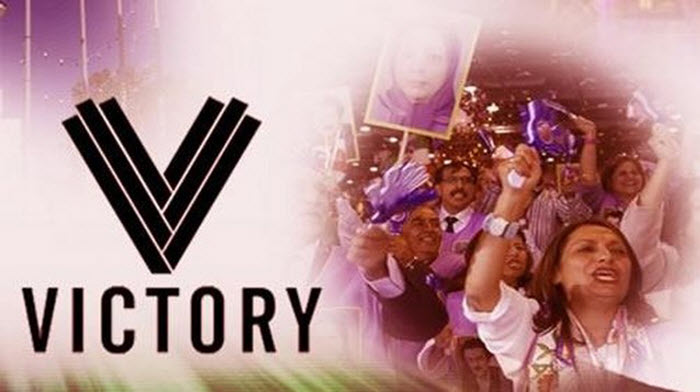 London, 17 Sep – Members of the National Council of Resistance of Iran (NCRI) have sent messages of congratulations for the safe and victorious transfer of the members of People’s Mojahedin Organization of Iran (PMOI or MEK) from Iraq to Europe and the failure of the Iranian regime’s plots.

In their joint message, National champion Moslim Iskandar Filabi and Ms. Mahin Meshkinfam wrote: “This great victory was not achieved easily. In the past 14 years, the tireless efforts of Mrs. Maryam Rajavi and perseverance of the PMOI (MEK) members as well as daily struggle of the PMOI (MEK) supporters around the world took apart the Iranian regime’s conspiracies and plots. Finally, honor prevailed over dishonor, patriotism over treason, and law over lawlessness. No doubt this victory will go forward until freedom in Iran and peace in the region are achieved.

Reza Olia illustrated this victory in a beautiful painting and wrote: “Congratulations on the auspicious and great victory of the Resistance and PMOI (MEK) heroes”.

Hossein Farshid emphasized in his message: “No doubt Iran’s history will talk about this victory forever and remember it as an example of the victory of self-sacrificing heroes over criminal dictators. Salute and greetings of the Iranian people and all freedom-loving people in the world to you the Mojahed (MEK) heroes. The impossible become possible. The anti-human mullahs’ regime received a major strategic blow and the Iranian Resistance harvested a qualitative leap towards the overthrow of the ruling clerics”.

NCRI official Ibrahim Mazandarani in a message said: “There is no doubt that with this victory we have reached a new phase of our human, national and revolutionary responsibilities. Undoubtedly, the morning of victory is near and we must continue the path with all our might all the way. I have no doubt that someday people of Iran will throw flowers at your feet and we will sing the anthem of victory at the tomb of our martyrs in Khavaran and elsewhere”.

Hossein Jahansouz said the “victorious relocation” of the MEK is another step towards regime change in Iran.

Hossein Saidian said, “A thousand congratulations on the occasion of triumphant relocation project of MEK members. The MEK will definitely continue its struggle for freedom and democracy more successful than ever”.

Hamidreza Taherzadeh said, “The MEK’s relocation is the dawn of beginning of the end of Iran regime and victory of Iranian people’s just resistance”.

Hamid Azimi said, “A thousand congratulations on the occasion of successful relocation of MEK, confidently in next steps Iranian people and their organized resistance will witness more wins”.

Bahram Maveddat and Firouzeh Ojagh, paying obeisance in front of the prodigious fourteen years long perseverance of the MEK, said we congratulate the MEK and the supporters of Iran resistance and MEK for the “victorious relocation”.

Manshour Varasteh, paying tribute to the martyrs of the resistance and MEK, said the most “important victory” of the Iranian resistance is achieved, and the “end of religious fascism” is closer than ever.

Reuters: Iran's President Mahmoud Ahmadinejad has no plans to...