An Administration Of “Die-Hard Iran Hawks” 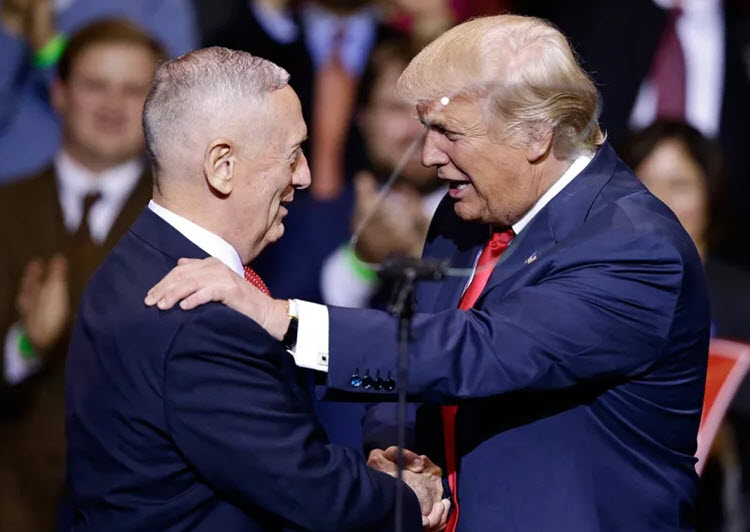 London, 8 Dec – Donald Trump appears to be building an administration of “die-hard Iran hawks”, according to James Carden at The Nation.

The president-elect’s surprise pick of retired General James N. Mattis for secretary of defence and his earlier decision to put retired General Michael Flynn at the NSC could be the starting point for Trump’s promised renegotiation on the Iranian Deal.

The Hawks are determined to limit Iranian interference in the affairs of other sovereign Gulf countries. They see Iran as the primary threat to peace in the Middle East.

Carden notes that Iran is not the only destabilising influence, as Saudi Arabia and Qatar also share some of the blame, which may be true, but, as Mattis once said: “[Iran] is the single most enduring threat to stability and peace in the Middle East.”

Mattis stated that the rise of ISIS is intrinsically linked to the Iranian Regime: “I consider ISIS nothing more than an excuse for Iran to continue its mischief. Iran is not an enemy of ISIS; they have a lot to gain from the turmoil that ISIS creates. What is the one country in the Middle East that has not been attacked by ISIS? Iran. That is just more than happenstance, I’m sure.”

Carden writes that Trump’s hatred of the Iranian Deal comes from his hatred of the US non-proliferation of nuclear weapons policy. He cited Trump’s claim that he would not object to nations like Japan, South Korea or Saudi Arabia getting nuclear weapons either. The difference between Iran and those three countries is that Iran is not a US ally despite the nuclear deal.

The State Department recently labelled Iran as the leading State Sponsor of Terrorism, so while that does not sound like a Regime that should have access to nuclear weapons, they should also not be reaping the benefits of the nuclear deal whilst they continue to support non-nuclear terrorism.

Congress recently passed a bill to extend the Iran Sanctions Act until 2026 and Obama confirmed that he would sign it.

Another key difference between Iran and the countries Trump listed is human rights abuses; according to the Human Freedom Index, Japan was ranked 32nd in terms of human rights, South Korea was 35th while Iran was ranked 157th out of 159 studied countries. Saudi Arabia was ranked 144th which is still better than Iran, if not by much.

Iran Is Thirsty As People Protest

The hollow promises of the Iranian regime to the...