Iran: Rouhani Will Struggle With Reforms Because He Never Intended to Deliver on Them 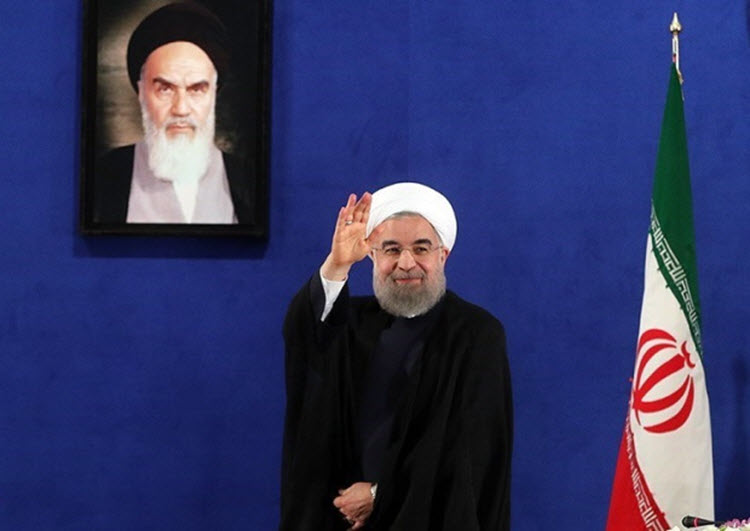 London, 7 Jun – Ever since the Iranian Regime’s sham elections on May 19, Western pundits have fallen over themselves to declare that a “moderate” has won a second term in Iran and now, before Hassan Rouhani has even made an effort to fulfil his campaign promises, they are providing excuses for him when he inevitably fails to reform the Regime.

Journalists like Parisa Hafezi and Jonathan Saul from Reuters are already blaming Rouhani’s failings on the “Anti-Western hardliners” and the strain between the US and Iran.

So let’s address all of this: Rouhani is not a moderate, he never intended to fulfill any progressive promises he made, and, most importantly, there is no such divide between moderates and hardliners within the Iranian Regime. Sure, the Regime is fighting each other, but they are fighting for power, not policy.

Not satisfied? Okay, let’s break it down point by point.

Hafezi and Saul wrote: “The hardliners’ strategy is to stoke already-simmering tension with Washington and its Gulf Arab allies, injecting fresh political risk into a country that had been seen as a safer bet since its 2015 nuclear deal with world powers.”

The Iranian Regime may appear to be complying with the deal for the most part, but they actually have a secret nuclear weapons facility which has been off-limits to independent inspectors at the International Atomic Energy Agency (IAEA) and they’ve tested several ballistic missiles, which although it does not violate the deal, does not promote good feeling either.

Hafezi and Saul even allude to this later in the article.

They wrote: “The Islamic Revolutionary Guard Corps (IRGC), the Shiite country’s most powerful military force, upped the ante, disclosing it had built a third underground ballistic missile production factory and would keep developing its missile program – a project strongly opposed by Washington and its Gulf allies like Saudi Arabia.”

Karim Sadjadpour, a senior fellow at the Carnegie Endowment, said: “Iran’s regional strategy has been consistent for four decades, regardless of who is president of the country. Opposition to the US and Israel hasn’t changed, and opposition to Saudi Arabia has intensified.”

In recent months, Iran has even upped its support for terrorist groups like the Houthis and Hezbollah and displayed threatening behaviour towards with US warships in the Gulf and Strait of Hormuz.

Rouhani promised to restart the economy of Iran, and he will fail, but not because the “hardliners” are working against him.

Andreas Schweitzer, the senior managing partner of London-based Arjan Capital, noted that despite the lifting of sanctions, many investors are unwilling to get involved with Iran as they fear that their money may be used to fund terrorism.

While Behnam Ben Taleblu, a senior Iran analyst at the Washington-based Foundation for Defence of Democracies, said: “Rouhani will continue to solicit the return of foreign businesses … to Iran without providing them with a much-needed change in behaviour to boost their confidence.”

Foreign investors are worried about the idea of putting their money in the hand of the IRGC, who Congress are debating whether to put on the Foreign Terror List, as they control about 80% of the economy.

Do moderates allow a terrorist group to control their economy?

In the end, Rouhani will fail to deliver his campaign promises because he never intended to keep them, not because he [incredibly lightly] criticised the IRGC, not because he insulted another member of the Regime and they are taking revenge.

Actual moderates would not get through the strict vetting process of the Regime in order to run for public office; at best they would be deemed unqualified to serve the will of the Supreme Leader, Ali Khamenei, and at worse they could find themselves imprisoned, tortured and executed.

Dozens arrested in demonstration by women in Iran capital