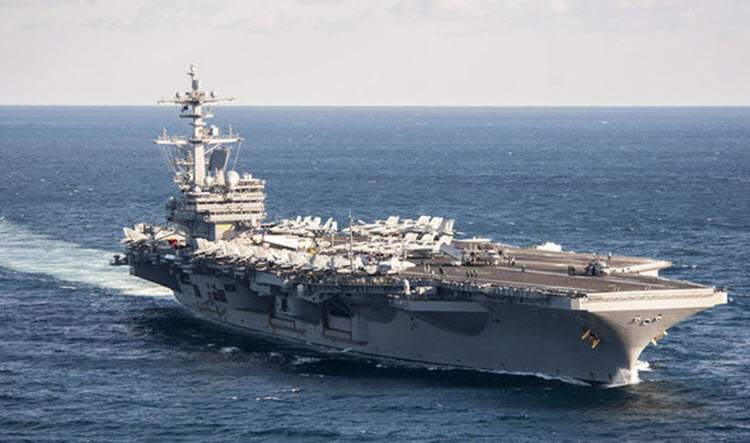 London, 16 Jun – US officials are reporting that ships belonging to the Iranian Regime have once again behaved threateningly towards the US Navy in the Strait of Hormuz.

The Iranian warship shined a spotlight and a laser at the US Marine Corps CH-53E helicopter which was accompanying three U.S. Navy vessels through the narrow waterway. They also came within 800 yards of one of the ships, according to Cdr. Bill Urban, a spokesman for the US Navy’s Fifth Fleet.

Urban said: “Illuminating helicopters with lasers at night is dangerous as it creates a navigational hazard that can impair vision and can be disorienting to pilots using night vision goggles.”

Urban reported that these actions were “unsafe and unprofessional” but that no warning shots were fired.

While the Iranian Regime does regular target boats passing through this key shipping channel, and has in the past targeted the US Navy, this instance is significant because it was carried out by the actual Iranian navy and not the officially-recognised terror squad, the Revolutionary Guard Corps (IRGC).

The three ships involved in this incident were the USS Cole destroyer, dry cargo ship USNS Washington Chambers, and the USS Bataan amphibious assault ship, which is designed to carry and deploy smaller vessels and helicopters.

The last “unsafe incident” in which the Iranian Regime targeted a US ship in the Strait of Hormuz was in March, when a small fleet of Iranian Revolutionary Guard fast boats blocked the path of US surveillance ship, the USNS Invincible, which uses sonar to track submarines and radar to monitor missile tests. The Invincible was forced to change course.

Just two days prior, an Iranian navy frigate came within 150 yards of the Invincible, in the Gulf of Oman, despite warnings to back off. The Gulf is just south of the Strait of Hormuz and separates Oman from south-eastern Iran.

More seriously, a US Navy destroyer was forced to fire multiple warning shots at Iranian patrol boats in January after they sped towards the destroyers with their weapons manned.

In May 2016, the commander of the IRGC threatened to close the Strait of Hormuz to the US and its allies if they “threatened” Iran, something which Donald Trump has been doing since he took office.

He has sought to re-align the US with the Saudis, increase sanctions on Iran for missile strikes, and Congress is currently debating whether or not to place the IRGC on the list of foreign terror organisations.