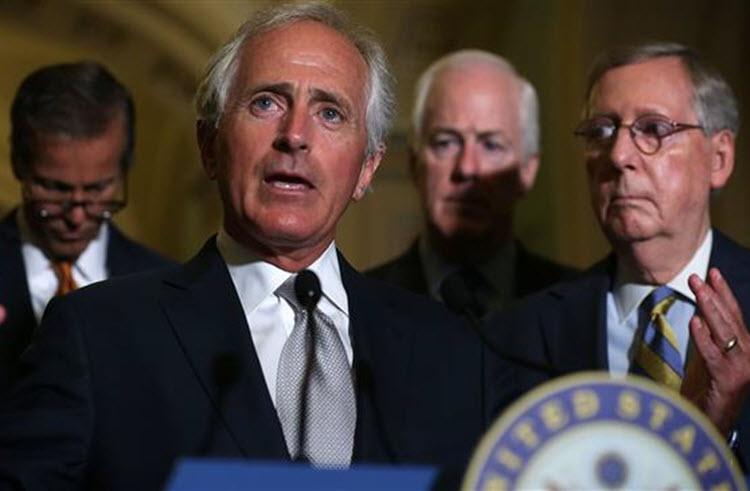 London, 16 Jun – Senator Bob Corker (R-Tennessee), the chairman of the Senate Foreign Relations Committee, has urged the Senate to pass a bill with would expand sanctions against Iran for ballistic missile development, support for terrorism, transfer of conventional weapons to or from Iran, and human rights violations.

The bill, entitled Countering Iran’s Destabilizing Activities Act of 2017, has 60 cosponsors, enjoys bipartisan support, and is expected to pass the Senate this week.

Corker made a speech in the Senate, in favour of this law and pleading for the Senate to support it.

He said: “I was in the [Sensitive Compartmented Information Facility or] SCIF recently – a place where senators go to read classified information – reviewing intelligence, and it truly is astounding what Iran continues to do around the world.”

He continued: “For a people that are capable of so much, their foreign policy is shockingly counter to their own interest. We see destabilising act after destabilising act – from missile launches, to arms transfers, to terrorist training, to illicit financial activities, to targeting Navy ships and detaining American citizens – the list goes on and on. And it’s past time for us to take steps to protect the interests of the United States and our allies.”

He spoke about the Iranian Nuclear Deal and it’s failures to protect the US from Iranian terrorism or nuclear weapons.

He said: “For far too long, the agreement – which I strongly opposed, as did our ranking member and presiding officer – has dictated U.S. policy throughout the Middle East.”

Corker also made clear that Donald Trump does have the power to revoke the nuclear deal.

He said: “I don’t think many people in our country or many people in this body realise that it is a non-binding political agreement that was entered into by one man using presidential executive authority and can easily be undone by one man using presidential executive authority….I don’t think most Americans understand that. He doesn’t have to take action to exit the agreement. All he has to do is decline to waive sanctions. I think that has been missed.”

He continued: “But no matter what the president decides, this bill makes it clear that the Congress intends to remain involved and will hold Iran accountable for their non-nuclear destabilising activities. What the nuclear agreement failed to do was allow us to push back against terrorism, human rights issues, violations of U.N. Security council resolutions relative to ballistic missile testing, and to push back against conventional arms purchases, which they are not supposed to be involved in.”

He then addressed the fact that the Iranian Regime has only worsened since the implementation of the nuclear deal.

Corker said: “As many of us predicted at the time, Iran’s rogue behaviour has only escalated since the implementation of the agreement, and this bipartisan bill will give the administration tools for holding Tehran accountable… It also sends an important signal that the U.S. will no longer look the other way in the face of continued Iranian aggression.”

He addressed that while there are political, partisan divides right now in the US, this shouldn’t be one of them. During his speech, Corker also thanked the committee and the co-authors of the bill for their constructive, bipartisan work, especially Democratic Senator Ben Cardin.

He said: “I think it is a good example of how the Senate can still work together to tackle complex and difficult issues.”

The bill passed in the Senate Foreign Relations Committee last month by a vote of 18 to 3.

AP: Tehran lashed out on Friday at the decision...