Iranian Drone Threatens US Navy in the Persian Gulf Again 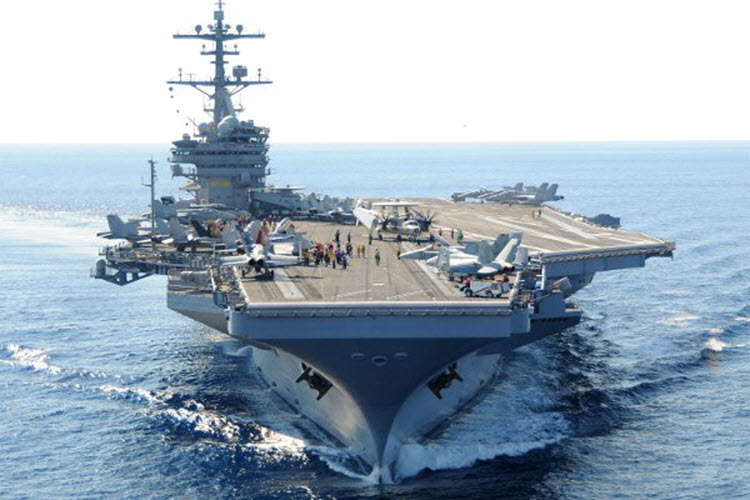 London, 15 Aug – The Iranian Regime has once again chosen to conduct an unsafe manoeuvre with an Iranian Unmanned Aerial Vehicle (UAV), coming within 1,000 ft of US forces in the Arabian Gulf, the US Navy has reported.

On Sunday, an Iranian QOM-1/Sadegh-1 UAV conducted a series of unsafe and unprofessional actions near to the aircraft carrier USS Nimitz during fixed wing flight operations, aimed at making the crew feel unsafe, according to a US Naval Central Command representative.

Lt. Ian McConnaughey, a NAVCENT spokesperson stationed in Bahrain, released a statement about the incident via email, in which he highlighted that the US made repeated radio calls to establish contact but the unarmed Iranian drone did not respond and continued to act in a menacing manner.

He wrote: “Despite repeated radio calls to establish communications and remain clear, the QOM-1’s controlling station was unresponsive and the UAV did not use any aircraft navigation lights while it made several passes in close proximity to Nimitz and its escort ships during active flight operations, coming within 1,000 feet of U.S. aircraft.”

He wrote: “The failure of the Iranian UAV to utilize standard, internationally-mandated navigation lights during a night time approach of a U.S. aircraft carrier engaged in flight operations created a dangerous situation with the potential for collision and is not in keeping with international maritime customs and laws.”

This incident comes just one week after another Iranian UAV conducted an unsafe approach towards the US Navy in the Persian Gulf.

On August 8, an F/A-18E Super Hornet assigned to the USS Nimitz was targeted by an Iranian UAV as the aircraft assumed its holding pattern and attempted to land on the aircraft carrier, according to the US Navy.

The Super Hornet fighter jet was able to evade the Iranian UAV, which had created a collision course by coming within 100 ft of the plane.

Aircraft from the Nimitz is conducting regular defensive manoeuvres for Operation Inherent Resolve in Iraq and Syria.

This most recent incident is the 14th unsafe interaction between the US and Iranian maritime forces in the Persian Gulf during 2017 alone, according to the Pentagon.

The Trump administration has previously imposed harsh sanctions against the Iranian Regime when they have threatened the US and we must wait to see what the response is to these incidents.

The Hill: Suppose they held an election and nobody...