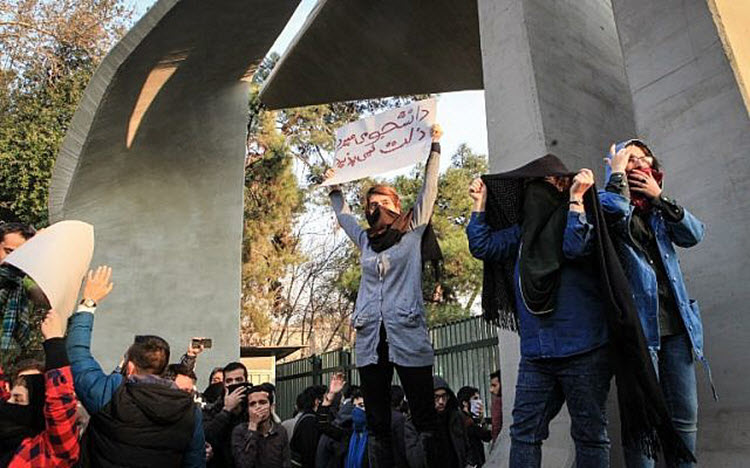 London, 1 Jan – Fear and confusion within the regime more than ever before as the uprising of the Iranian people is escalating

On the fourth day of the nationwide uprising, Khamenei the supreme leader remains silent. Rouhani, the regime’s president, also canceled his speech yesterday. Iran daily, associated with Rouhani, announced, “in light of recent events and several days of conflict in different cities of the country, the president will speak on these incidents in a couple of hours”. However, two hours later, one of Rouhani’s spokesmen said, “There is no speech in Rouhani’s program today.”

Meanwhile, the mullahs’ regime shut down schools in Tehran and many cities under the pretext of “air pollution” for today and tomorrow.

However, on the fourth day of the nationwide uprising of the Iranian people to overthrow the mullahs’ regime, the regime’s officials were compelled to acknowledge the anger and disgust of the people against the regime and the extent of the uprising.

The mullahs’ interior minister said today, “The events of the last few days have caused concern, sadness and discomfort for our dear people, and … the created atmosphere …. Has damaged the security of the country.” Everyone knows that the meaning of “dear people” and “the country” is nothing but the criminal gangs and corrupt mullahs of this regime who have destroyed Iran’s assets and have killed the people for 39 years.

The mullahs’ interior minister, whose fear of the uprising could be seen in his every single words, said: “Those who attempt to destroy public property, and create unrest and lawlessness, and undermine the people’s security, are responsible before the law and should be held accountable for their behavior and pay its cost.” He added, “Those who misused the cyberspace and used it for the purpose of destroying security, irregularity, law-breaking and destruction of the people’s property, have shown that it was just an excuse to use this capacity.”

Meanwhile, Mehr, the state news agency, wrote today that the PMOI /MEK”is behind the recent turmoil and manages it.”

Ali Asghar Nasser, the security and law enforcement deputy of Tehran governorate, said “A few individuals yesterday disrupted the people’s comfort, and they were arrested quickly.” He added these few people! Threw “stones at the police force, damaged police vehicles, and broke windows of the banks and …”.

Despite regime, official try to damp the nationwide uprising, the scope of the unrest against the mullahs’ regime continues to spread and includes vaster parts of Iran.

In Tuyserkan, the people booed the anti-riot unit that was making a lot of noise to intimidate the people. The regime’s mercenaries fired tear gas to disperse the protesters. The people set ablaze a government vehicle in front of the governorate. Following a brutal attack of the Revolutionary Guards on the crowd, one of the demonstrators was martyred, and some other wounded. The angry people chanted “Down with Khamenei” and set fire to a government vehicle and many parts of the governorate.

In Doroud, the brave people were demonstrating while chanting “death to the dictator”, and “Vigilant people, Support, Support”, and “Fellow citizens, we are waiting for you.

In Tehran, in the Enqelab (Revolution) Square, the police attacked the people who were chanting “Death to Dictator”; however, it turned to a clash. At the University of Tehran, while the security forces are stationed in front of the university, the students are chanting “No embezzlement, No JCPOA, just Resistance”.

At Azadi Square in Kermanshah, the police attacked the crowd and it turned to clashes. The criminal IRGC forces severely beat and injured the youth. A government vehicle was burnt by protesters.

In Ardabil, the anti-riot guards attacked the protesters at the Khomeini intersection.

In Sanandaj, the people chanted “Political prisoners must be freed”, and clashed with anti-riot guards.

In Khorramdarreh, the regime’s mercenaries attacked the protesters which turned into clashes. The anti-riot guards threw tear gas at people.

In Behshahr, the repressive forces severely battered the demonstrators.

In Ahwaz, courageous young people seized the vehicle of a special unit.

In Chabahar, people chant, “So many troops have come against (Supreme) Leader”.

In Hamadan, Aligudarz and Urmia, people continue their protests by chanting anti-regime slogans.