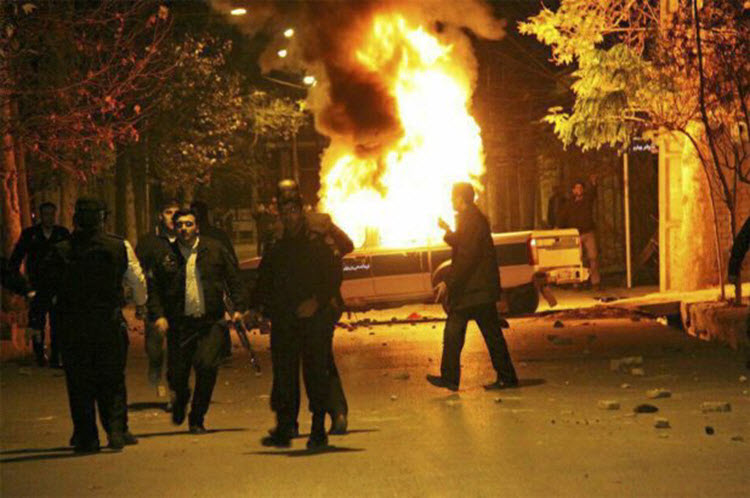 London, 4 Jan – Those who have been watching Iran for long enough have experienced many moments in which they thought that the Iranian Regime would certainly collapse, but the recent protests have renewed hope that the brutal clerics will not celebrate 40 years in power.

As Saudi writer Mohammed Al-Shaikh points out in an op-ed for Al Arabiya, all revolutions must transform into a civil state if they have any hope of long-term power. The Iranian Regime has refused to do this and so they will certainly fall. It is just a question of when.

This current wave of protests, dubbed the revolution of the hungry, is markedly different than the ones that came before it because has no specific ideological orientation and no specific, centralised leaders for the Regime to target, arrest, and execute. It is instead a popular revolt born out of the failure of the Iranian Regime to meet the people’s most basic needs because of the Regime’s focus on exporting its revolution across the Middle East and creating a Shiite Corridor from the Persian Gulf to the Mediterranean. Something which would be impossible to achieve in this day and age.

Everyone who takes part in these protests is doing so because they personally believe in the cause; they were heavily affected by the Regime’s destruction and they wanted to revolt against it. The protests began over a steep increase in the cost of living and turned into a wide anti-regime revolt. They started in Masshad, before spreading across all major cities and towns (including Tehran) to the clerics’ stronghold, Qom.

Al-Shaikh writes that even if these specific protests don’t result in the expulsion of the Regime, it gives hope to that real change is coming. He says that the mullahs may be forced to change their ways if they remain in power- although it is doubtful that they will really change because they haven’t in the past 40 years. They will not abandon their revolutionary conquest and they will fall because of it.

Al-Shaikh wrote: “I do not think the mullahs’ regime will stop exporting the revolution and transform into a civil state as this will signify cancelling the Khomeini revolution. It will also mark the end of the idea that Iran’s number-one-ruler is the guardian jurist. I am certain that the ruling elite and the revolutionary guards will completely reject this. Therefore, I think the guardian jurist Ali Khamenei will resort to the reformist religious movement as they describe it and marginalize the hardline movement as part of a tactical measure to absorb the street’s anger which threatens the entire existence of the mullahs’ regime.”

Whether the Regime collapses entirely or manages to suppress this protest remains to be seen but one thing is certain, with this fierce populist fire burning in Iran, 2018 will be a transformative year.

New York Times: The Obama administration is working to...