Iran’s Protests Are Far From Over 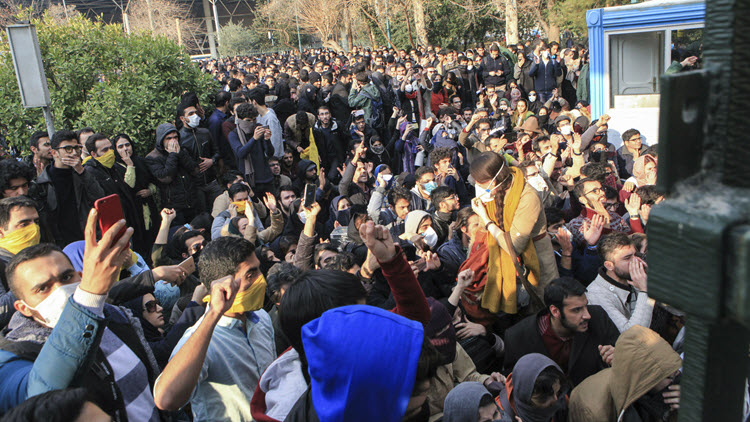 London, 8 Jan – Well into its second week of protests, the Iranian people’s uprising is not going away anytime soon.

While modern Iran has seen its fair share of revolutions, one on the same scale as the current protest has not been seen since 1979. With that level of raw anger, how could anyone believe the security forces when they claim that the protests are all but over?

The protesters are mainly working-class Iranians whose needs are largely ignored by the ruling elite, and as such the protests are evident all over Iran from the biggest cities to the smallest villages. The Regime, who expected the largest protests to be held in major cities, were caught off guard by this.

The protests started over a large rise in the cost of living but quickly evolved into an anti-regime protest, with attacks on Regime institutions (barracks, banks, government buildings) and chants against Supreme Leader Ali Khamenei.

Most of Iran has faced greater impoverishment under the Rouhani presidency, with some of the insurgent cities facing as much as 40-60 percent unemployment rates. His budget, publicized or leaked right before the uprising, cut subsidies to the poor while increasing funding for the Revolutionary Guards and religious foundations viewed by many Iranians as corrupt, state-supported conglomerates. And Iranians were enraged as they struggled to feed their children while their government spent billions on its foreign adventures in Lebanon, Syria, Iraq and elsewhere.”

While the better off in Iran, may not share the protesters’ economic problems, they certainly share an anger over governmental corruption, regional terrorism, and human rights abuses.

These protests are a direct result of mismanagement, greed and repression by the Regime; it is no surprise that the people are protesting.

And in doing so, the Iranian people have uncovered the chink in the Regime’s armour. If the people of Iran do not approve of the Regime, then the international community has the leverage to use against the Regime and the power to help the Iranians.

Ultimately, only Iranians can change Iran. But the Trump administration could increase U.S. leverage by rescinding the travel ban against Iranians, by providing satellite internet to Iran’s struggling activists, and by increasing support and funding for human rights efforts. It would be wise for Washington to keep the Iran nuclear agreement while it pressures the Islamic Republic on other fronts. After all, the source of Washington’s problem is not just the nuclear program, but the regime that wields it. And ultimately, the key to finding a permanent solution to the nuclear program is fundamental change in Iran, which may be beginning.”

These protests are not over, not by a long shot; a barrier has been broken and there is no going back. Even if these current protests don’t bring the Regime to its knees, it won’t be far off.

Irans exports to China rise by 40%