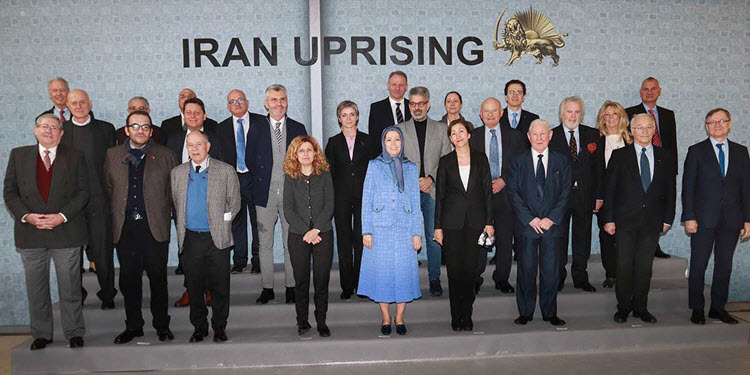 Mrs. Maryam Rajavi, the President-elect of the National Council of Resistance of Iran (NCRI) addressed the speakers and spoke about the changing circumstances in Iran. She said that the situation was changing for the better and spoke about four main issues.

Firstly, she said that the recent uprising in Iran was a turning point in the developments of the past few years. Mrs. Rajavi said that the conditions in Iran will never go back to the way they once were. In other words, the regime will not be able to oppress or suppress the people into silencing their discontent any longer. She said that the recent events in Iran were more than simply protests and demonstrations about the economy. Rather, it was a nationwide movement against the entirety of the clerical regime. The protest spread quickly to 140 cities across the country. Furthermore, the corruption within the leadership has exhausted all of the regime’s resources. The regime has no power to resolve any of the problems. Only serious political change can solve the severe social crisis in Iran. Mrs. Rajavi highlighted that the people were chanting “Death to Rouhani and to the reformists and the hardliners” showing that all of the regime was targeted.

Secondly, speaking about how the regime confronted the uprising, the leader of the Resistance said that once again the regime imposed repression like it has done in the past. It imposes many things on the people including a compulsory religion, the compulsory wearing of a veil, and so on. Mrs. Rajavi noted that the regime teaches and carried out practices that go against Islam. The role of women was discussed, and Mrs. Rajavi describe the women of Iran as an “explosive force” and one that the regime cannot cope with.

Mrs. Rajavi emphasised the Iranian Resistance is behind the people of Iran and is working towards an Iran where people can make their voice heard without fear of arrest, torture or execution. Fifty people have been killed, as far as we are aware, and at least 12 of them have been tortured to death. More than 8,000 people have been arrested for protesting. However, as hard as it may try, the regime does not have the power to stop the protests. It can clamp down on the people, but it cannot stop them from protesting and Mrs. Rajavi predicted that we will see more protests in the near future. 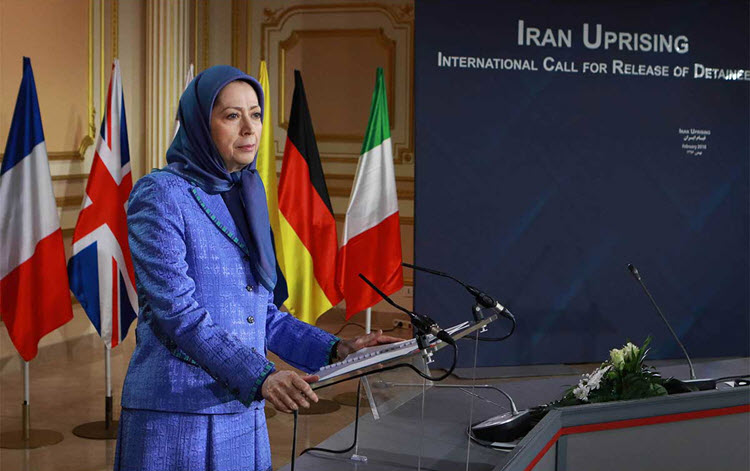 Mrs. Rajavi highlighted the role of the Iranian Resistance in guaranteeing peace, stability and security in Iran. She said that although the regime believes the Resistance is behind the uprising, it has in fact a much deeper role. It is the only chance of a democratic and free Iran and it has already offered plans and a structure for a future Iran. It is a viable alternative to the Iranian regime.

Finally, with regards to European policy on Iran, Mrs. Rajavi called on the European Union and its member states to adopt effective measures and binding decisions to ensure that the religious fascism ruling Iran frees the imprisoned protesters, guarantees freedom of speech and assembly, ends the suppression of women and abolishes the compulsory veil. She advised that all relations with Iran must be conditioned on an end to executions and suppression.

Martin Patzelt, a member of the German Bundestag’s Human Rights Committee, said that as representatives of the free world we have a responsibility to act and speak out against the atrocities happening in Iran. Europe needs to stay on the side of the Iranian people and not speak a dual language, he said. With regards to the people that are being tortured to death in Iran, Patzelt said that we should not remain indifferent. The Iranian regime’s policies have never been in favour of peace and stability because that would shake its foundations. Hence it is spending all the country’s money on supporting terrorist groups in the region.

Member of the Romanian Parliament, Romeo Nicoara, told the audience that we are living through a historical moment. He compared the current situation in Iran to what Romania went through three decades ago when the people protested against the regime. He said that the suppressive forces tried to stop them, but they could not manage. He has big hopes that the same result – democracy – will come soon to Iran.

Member of the Italian Parliament, Valeria Cardinali, focused on the plight of the women of Iran. She praised Mrs. Rajavi’s hard work and determination and said that she provides so much encouragement and hope. She said that Mrs. Rajavi and the other woman in the Resistance are showing the women of Iran that they can be strong and have a legitimate and equal place in society. Finally, she called on the whole of Europe to recognise the NCRI as a viable alternative to the Iranian regime.

Roger Lyons, former General Secretary of the largest union in Britain and former President of the Trade Union Congress, has participated in a number of rallies in London in the past few weeks and he declared his support for the Iranians who are calling on the British government to turn solidarity into meaningful actions. He praised the statement made on 3rd February by the International Trade Union Federation (ITUC) that called for the its 200 million affiliated members in 163 countries to take practical action in solidarity with the Iranian people. This, he said, is the strongest statement that calls for demonstrations at all Iranian embassies and delegations to the government in 163 countries. This, he hoped, will raise the level of solidarity to a new level.

He addressed Mrs. Rajavi, and the whole of the Resistance, saying that the uprising in Iran more than justifies all of the hard work that they are putting into bringing change to Iran. Pressure on individual governments is crucial and he said that in Britain they are calling on the UK government and the EU “to stop paying lip service” to the Iranian regime.

Member of the Italian Parliament, Elisabetta Zamparutti, also emphasised that now is a crucial moment of the Resistance because demonstrations are continuing despite the thousands of arrests and killings that are taking place.

Zamparutti expressed her astonishment of the regime’s massacre of human life and reminded the conference that the nature of the regime is still the same as it was in 1988 when the massacre of 30,000 political prisoners took place.

The regime does not recognise human rights or democracy and she gave this as one of the reasons why we need to support the Iranian Resistance, now more than ever. She also emphasised that Europe must factor human rights into all relations with Iran.

Reuters: Iran would respond militarily if the United States...