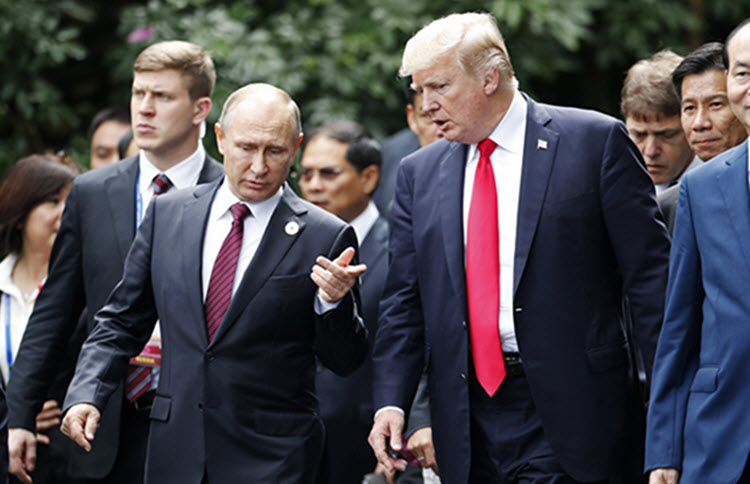 London, 12 July – US President Donald Trump will be meeting his Russian counterpart Vladimir Putin in Helsinki on 16th July. The purpose of the visit is to soothe the tense relations between the two countries and it is a much anticipated meeting between the two leaders.

The Prime Minister of Israel, Benjamin Netanyahu, has spoken about his interest in the outcome of the meeting and has said that he is anticipating the “deal of the century”.

This has nothing to do with the Palestinian cause, rather the Israeli Prime Minister is hoping that Trump will accept the Russian occupation of the Crimean Peninsula and East Ukraine. Furthermore, he would like the sanctions to be lifted and for Putin to be given the US go-ahead to control Syria. The upside of all of this would be that Russia gets rid of the Iranian presence in Syria.

To rid Syria of Iran and its numerous different militias and proxy groups would be a positive development for Israel.

Whatever may be discussed between Putin and Trump is only speculation. However, Trump has made it very clear that the US is going to come down hard on Iran, and it is encouraging its allies to do the same.

The US President has identified Iran as one of the main problems in the Middle East. Since the Syrian civil war started, Iran has been present to fuel the chaos and support Syrian dictator Bashar al Assad. Without Iran’s involvement, there is no doubt that the Syrian civil war would have ended years ago, not least because Assad would have run out of resources.

What Russia wants to do in Syria is not very clear but there has perhaps been a positive development in the fact that Iran and its fighters from various different militias were prevented from being involved in the Daraa governorate battle.

So now it remains to be seen if Assad will ask Iran to leave. And if so, will Russia remove Iran from Syria by force if needs be?

Iranian dictators are under immense pressure, not just from abroad, but also at home. In fact, especially at home.

Since the end of last year, the people of Iran have not relented in making their discontent known. They are fed up of the Iranian regime destroying the country’s economy and they are calling for regime change. They are well aware that their situation will never improve for as long as the regime is in power. It is incapable of change and moderation is nothing but a myth.

Iran: GCC dismisses threats made by Iran as breech of UN Charter

Daily Telegraph: The world is closer to apocalypse because...