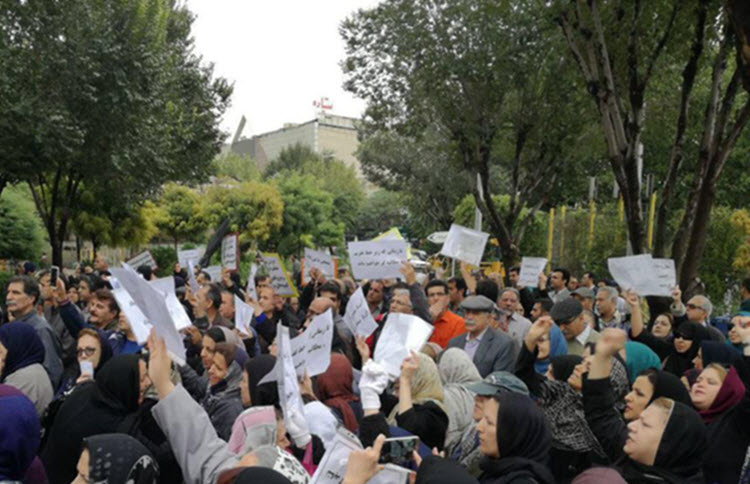 London, 19 July – Iranian teachers have launched a protest movement over their low salaries, which has gained momentum in recent days, according to social media reports.

The campaign, which has the slogan “No! to Payslips and Salaries”, was launched by several teachers’ rights activists following an announcement by the Ministry of Education that they would be increasing teachers’ salaries six to ten per cent for the 2018-19 school year, according to local news website Khabar Online.

Khabar Online reported that the decision to boost salaries has only come after months of delay and that Teachers Trade Union activists believe that the increase does not match the current inflation rate, which is currently rising high thanks to an uncertain economy, meaning a real-terms cut in salary.

This move is unacceptable for teachers, who are already one of the lowest paid employees in Iran and suffer from very irregular payments.

The campaign began on Wednesday, July 11, and will continue for ten days, according to Ja’afar Ebrahimi, the Inspector of Coordination Council of Teachers’ trade unions across Iran.

He said that the Ministry of Education’s (MoE) refusal to account for the hardships and demands of the educators’ and the Management and Planning Organization’s (MPO) inability to provide an “appropriate budget for educators’ salaries” is creating a deep crisis for teachers and students.

Many activists are also reporting that the MPO and MoE have eliminated certain bonuses for teachers, including extra pay for hardship, while teachers are calling for a complete review of their insurance policy and the payment of extremely overdue bonuses for their retired colleagues.

Video footage and still images, which are being widely circulated on social media, show angry teachers and educators tearing up their payslips in protest.

The online campaign has recently made its way to the streets, with large protest rallies being held outside the MoE’s offices across the provinces of Qazvin and Fars, which form part of the overall Iranian uprising.

In recent years, Iranian teachers have repeatedly held protest rallies to demand respect for their rights, including trade union membership, but the authorities have failed to deal with these protest appropriately, instead arresting protesters and charging them with vague crimes including “propaganda against the establishment”, “disrupting public peace and order”, and “attempts against national security”.

According to human rights organizations, there are three prominent teachers’ rights activists in prison on these charges: Esma’eil Abdi, Mahmoud Beheshti Langarudi and Mohammad Beheshti.