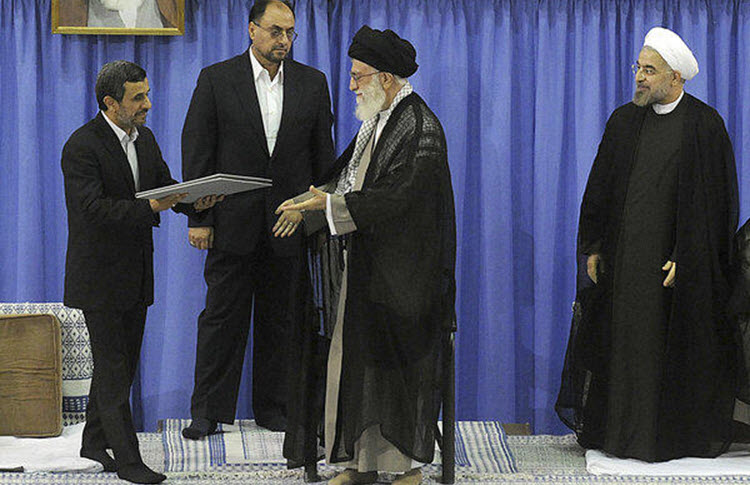 After days of increased protest by the people of Iran, Ahmadinejad posted a video on his Telegram social media account on Thursday, where he explained that Rouhani is unfit for public office.

He said: “Your continued presence is at the expense of the country.”

Ahmadinejad, who held the office of President from 2005 to 2013, has been increasingly critical of Rouhani and even the Supreme Leader Ali Khamenei over the past few months, but this shouldn’t be mistaken for any kind of moderation or respect for the people’s wishes. Instead, this is merely part of Ahmadinejad plan to gain power – he was blocked from running in last year’s presidential race by Khamenei – and avoid prosecution in an ongoing corruption trial.

This is yet more evidence of infighting amongst the mullahs, which belies how weak they really are. Each band is trying to take advantage of the protests to take control, much like how the mullahs stole power during the 1979 revolution.

The Iranian people are protesting in the streets over a failing economy, vast corruption, and the inability of the government to deal with any of the people’s concerns. While the people are undoubtedly calling for Rouhani to go, they are also calling for the fall of the Dictatorship. They don’t want Ahmadinejad back.

There are several videos of the Iranian people’s protests across Iran, which show thousands of demonstrators chanting “death to the dictator! Death to Khamenei! Death to Rouhani!” and “Mullahs must get lost!” There doesn’t seem to be any uncertainty about what the people mean.

Other videos show idle buses, unable to move because the government has refused to pay its debt to the fuel supplier, which has resulted in thousands of Iranians left stranded. This is an apt metaphor for the Mullahs rule as a whole.

The Iranian uprising has been recently reinvigorated by a failing economy, which was caused by the mullahs’ corruption and mismanagement, and has been further damaged by US sanctions, which have returned since Donald Trump pulled out of the nuclear deal in May.

The Iranian people are in support of these sanctions, because they know that sanctions relief has not benefitted them. Instead, it enriched the mullahs and allowed them to fund terrorism and the violent crackdown on the people of Iran.

The Hill: An Israeli Cabinet minister said Secretary of State...