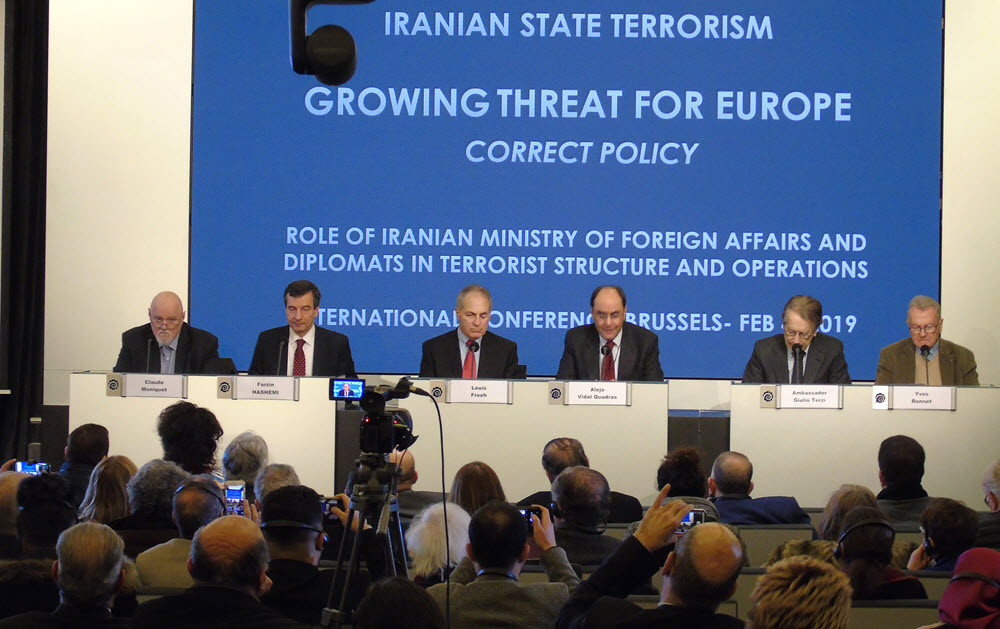 London, 5 Feb – A conference was held in Brussels on Monday discussed the Iranian state terrorist activity that is posing a great threat to Europe.

The event was moderated by a former European Parliament Vice President Dr. Alejo Vidal Quadras. He stressed the involvement of high-level officials in Iran who are clearly coordinating terrorist attacks in Europe.

Quadras also criticised the EU for its lack of firm policy towards Iran, accusing the EU foreign policy chief Federica Mogherini of turning a blind eye to the truth. He said: “The remarks of Iranian officials and the facts on the ground leave no doubt that we are faced with the rise of Iranian terrorism against Europe. We must protect our countries.”

Farzin Hashemi, a member of the Iranian opposition National Council of Resistance of Iran (NCRI), spoke about the Iranian regime’s terrorist activities and its terror network in Europe. He said that Reza Amiri Moghadam from Iran’s MOIS (intelligence agency) worked with Vienna-based diplomat Asdollah Assadi to bomb the Free Iran rally in Paris last June. “This is a clear example of the coordination of Iran’s different agencies and that decisions are made at the highest ranks of the regime.”

Furthermore, he highlighted: “The MOIS is closely tied to the Ministry of Foreign Affairs in terrorist activities. Terrorism is institutionalized at the highest levels of the mullahs’ regime, at the Supreme Security Council headed by the President, now being Hassan Rouhani. Afterwards, the decisions are sent to the office of Iranian regime Supreme Leader Ali Khamenei for approval. Terrorism is part of the regime’s DNA.”

With regards to how to deal with the Iran threat, former French intelligence chef Yves Bonnet advised that the European Union needs to make it very clear that countries are prepared to close embassies – especially because they are being used as “bases of operations for its terrorist activities”. Going hand in hand with this decision would to be expel the diplomats that are clearly in Europe to eliminate members of the opposition. He made it very clear that strong measures must be taken against the Iranian regime that has a habit of resorting to terrorism when times get tough.

Former Italian Former Minister Giulio Terzi also echoed this strategy to expel criminal diplomats. He advised that the EU member states should adopt “clear and proactive initiatives” to protect and guarantee the “safety and security of our people”.

Former FBI Director Louis Freeh reminded the EU of the “dangers and consequences of improper appeasement” and emphasised that Iranian terrorist activity is on a huge scale – it is not just a handful of rogues working individually. “It’s controlled by the state. The constitution of the regime dictates to pursue terrorism against activists and opponents. The regime has a pattern of practice of terrorism to achieve its goal.”

Claude Moniquet, a retired French journalist and a former intelligence agent at the French Directorate-General for External Security, warned that the “regime has developed a security apparatus that, on the one hand is designed to extend its rule, and on the other, to expand its terrorist ideology abroad”.

Quadras asked many questions about the EU’s appeasement of Iran, questioning its decision to ignore acts of belligerence and to sanction on one single branch of Iran’s intelligence ministry. However, the most pertinent question is why the EU wants to ignore terror attacks and work on trading with the terrorists. “Why are Europeans seeking business as usual with the Iranian regime?”

(Reuters) - Britain and other powers negotiating with Iran...

US says concerned about post-poll situation in Iran

Reuters: The United States is concerned about the post-election...